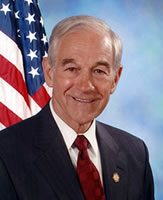 Congressman Ron Paul of Texas has scheduled a hearing Thursday on legislation he introduced that would direct the Secretary of the Treasury to conduct an assay, inventory, and audit of all U.S. gold reserves — much of which is held within United States Mint facilities, including an analysis of the measures taken for their security.

"The Treasury Department has been less than transparent with the results of its gold audits. It is asking the American people to trust that all the gold is there, while not allowing site visits and not publishing all the data it holds on its audits and assays," Paul said in a press statement. "Since most of this gold was originally seized from the American people in the 1930s, they deserve more transparency than a handful of financial statements."

Ron Paul, chairman of the U.S. House Financial Services Subcommittee on Domestic Monetary Policy and Technology, will begin the hearing at 2 p.m. ET in Room 2128 of the Rayburn House Office Building.

The topic of specific discussion is legislation entitled the Gold Reserve Transparency Act of 2011, numbered H.R. 1495, which Ron Paul introduced in the U.S. House of Representatives on April 4. The hearing before Paul’s subcommittee is similarly named, "Investigating the Gold: H.R. 1495, the Gold Reserve Transparency Act and the Oversight of United States Gold Holdings."

Witnesses who are scheduled to testify before the subcommittee include Gary T. Engel, Director, Financial Management and Assurance, Government Accountability Office and
Eric M. Thorson, Inspector General, Department of the Treasury.

Should the Gold Reserve Transparency Act of 2011 pass, the United States Mint would be among the agencies affected since the bureau holds a significant portion of all U.S. gold reserves. The Financial Management Service in its May 31, 2011, report noted that total U.S. gold reserves stood at 261,498,899.316 fine troy ounces. United States Mint held gold in Denver, Fort Knox and West Point account for 245,262,897.040 ounces of the total, as highlighted in the following Financial Management Service report.

The additional assay, inventory and audits Ron Paul would like to see implemented are described in the Gold Reserve Transparency Act of 2011 as follows:

(a) The Secretary of the Treasury is directed to conduct and complete, not later than six months after the date of enactment of this Act, a full assay, inventory, and audit of gold reserves of the United States at the place or places where such reserves are kept, together with an analysis of the sufficiency of the measures taken for the security of such reserves.

(b)(1) The Government Accountability Office shall review the results of such assay, inventory, audit, and analysis and, not later than nine months after the date of enactment of this Act, shall prepare and transmit to the Congress a report of its findings, together with the results of the assay, inventory, audit, and analysis conducted by the Secretary of the Treasury.

(2) For purposes of such assay, inventory, audit, and analysis, the Government Accountability Office shall have access to any depository or other facility where such reserves are kept.

(c) The Secretary of the Treasury shall make available, in order to facilitate the review of the Government Accountability Office under this Act, all books, accounts, records, reports, files, correspondence, memoranda, papers, or any other document, tape, or written, audio, or digital record pertaining to the assay, inventory, audit, and analysis required by this Act, as determined by the Government Accountability Office.

Before any legislation becomes law, it must pass in the House, Senate and get signed by the President.

Do you want to help Ron Paul get the job done? Please consider donating a few buck to our moneybomb. It’s easy and every dollar helps.

This Bill will never pass.
The gold is not there (not all of it) and they will never let you know about it.