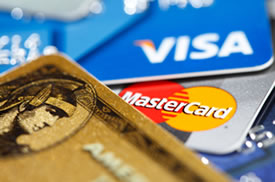 U.S. Postal Service inspectors are investigating the fraudulent use of stolen American Express credit cards to purchase apparently tens of thousands of dollars of gold coins.

"The orders are placed by phone, often for $10,000 to $20,000 worth of Liberty Double Eagles or other, large-sized gold coins. The callers have a foreign accent and sometimes have problems pronouncing the name on the credit card. They’ll phone dealers and will correspond by email, but no one ever answers the phones when dealers try to call them back," said Michael Fuljenz, President of Universal Coin & Bullion in Beaumont, Texas who has been working with postal inspectors on several cases.

"The callers want the coins shipped by overnight delivery to residential addresses in either Gaithersburg or Montgomery Village in Maryland, then phone or email back asking for the tracking number of the shipment. The location they give for delivery matches the address you get when you use the American Express address verification system; however, it turns out those are not the actual addresses of the victims whose stolen credit card numbers are being used," said Fuljenz.

"The four-digit verification codes and other information on the credit card are also seemingly correct when you check with American Express or the credit card processor. However, it appears that various precautionary security mechanisms may have been tampered with because it’s really not the right verification information despite the seemingly correct initial match up. The thieves may have somehow compromised the American Express records system."

Fuljenz has provided evidence and assisted regional postal inspectors in Washington, DC in their recent investigations. He urges anyone with information or requiring assistance to contact Postal Inspector Christopher Saunders by phone at (202) 636-1484 or by email at CASaunders@uspis.gov, or contact Mike Fuljenz at (409) 658-4533.

Inside jobs will become the norm now that the government is seizing our personal, financial, and purchase profiles. Once the government stores your data, illegally, as in Patriot Act secret searches or NSA eavesdropping, then that data is easily transferrable to any of a host of nefarious underworld partners of the government. Don’t think it so; consider this…. where is the jewelry being stolen from our 4th amendment violating flight bags as they are searched? Why, in plain sight, at legitimate sales spots also in on the scams. Remember, the Po Po are the ones checking for stolen items at… Read more »

Darrin Lee Unser - August 3, 2021 336
Two of the most anticipated numismatic releases of the year happen today after a delay from their initial June 1st scheduled appearance. At Noon...