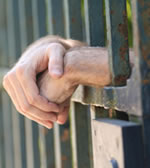 The robbers then proceeded to torch the shop’s safe to steal approximately $750,000 worth of rare and common coins.

From the evidence of the robbery, it appeared the criminals were familiar with the layout of the shop and knew when and where to strike. At the time, they made a clean getaway.

Their time now, however, will likely be spent behind bars for several years. Ohio.com has reported the arrest of two people police believe are responsible for the theft. Michael J. Patton, 38, of Seven Hills, and Kevin J. Hartman, 37, of Parma were arrested and are now in jail.

Mr. Endress’s coins were discovered behind an attic wall owned by Hartman’s brother and sister-in-law, who were also arrested and charged with receiving stolen property.

In a video report by wkyc.com covering the initial arrest of Mr. Hartman and the recovery of the coins, Chet Endress said,

“Seems like a pretty high-risk occupation. It’s a wonder somebody didn’t kill them. I just can’t understand it. I would never do it — when a guy spends all his life doing this, they take it in two or three hours. It just isn’t right.”

The theft of the coins forced the closing of Chet’s Coin Shop. Hopefully Mr. Endress can now experience some peace of mind and perhaps reopen his business.