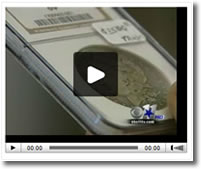 A heavy vault door wasn’t enough to stop thieves from stealing more than $200,000 in rare coins from a local Benbrook, Texas coin shop. Neither was steel rebar and 8 inches of concrete.

The theft happened in the middle of the night and it must have taken several hours to complete.

The thieves bypassed an impenetrable looking vault door, and instead dropped into the vault through the ceiling after meticulously drilling through 8-inches of concrete and rebar.

A surveillance camera was present, but the thieves cut it during the heist of the many trays of coins. They were apparently in such a rush after gaining entry that dropped coins, even if expensive, were simply left on the ground.

Coin dealers are asked to be on the look out for the stolen coins.

The Texas CBS11tv.com video report may be viewed by clicking the play button.

Why does thieves steal rare coins? Do you think that they want to collect rare coins or want to sell them?

I’d have to say sell, sell, and sell!

Theives are in it solely for profit. Coins can be easily turned to cash,which is what their after.