Created by Chris Costello and sculpted by Eric David Custer, the new quarter’s reverse (tails side) depicts Bessie Coleman as she suits up in preparation for flight. Her expression is reflective of her determination to take to the skies, the only place she experienced a freedom she did not have on the ground.

Obverses (heads side) for all quarters in the series share a depiction of George Washington which was sculpted 90 years ago by Laura Gardin Fraser to mark Washington’s 200th birthday.

On Feb. 14, the U.S. Mint at https://catalog.usmint.gov/ will offer Bessie Coleman quarters in an uncirculated finish for coin collectors. Uncirculated quarters originate from the Philadelphia, Denver, and San Francisco Mints. They are hand-loaded into coining presses and struck on specially burnished blanks to a produce a brilliant finish. Product options will include a two-roll set, a three-roll set, and 100-coin bags at prices ranging from $36 to $54.

And sometime this morning my subscriptions have reappeared. Maybe so for the Kaiser as well, and he can stop fretting! As for the women’s quarters that means for the year (not just the first issue) they are sold out (at least all the subscriptions) so unless people drop out you are out of luck, except on the day of release when you get to fight for the very few rolls that might be available, either because the mint holds a few in reserve for the day of release, or there are rolls in limbo land (those belonging to people who… Read more »

All of that teeth-grinding worry for naught. At least now I can go back to my normal everyday levels of anxiety, depression and OCD. Many thanks, Tom, for informing me that the numismatic version of the Siege of Leningrad has ended.

Tom, if you were into sports broadcasting as deeply as you are into coin reporting I swear you would be a fabulous play-by-play commentator. You and [Good Sir] Rich could sit side by side in the booth and call the games seamlessly and flawlessly, much as you both do now with your numismatic news flashes. As far as ordering extra AWQ 3 Roll Sets, I only did that once with the Sally Ride Quarters because I’m a lifelong astronomy and space travel (not to mention science fiction) enthusiast. But I have never sold a single coin from my collection nor… Read more »

The Mint, Major D, is in a curious and interesting position when it comes to setting the Household Order Limits when it comes to certain very popular Subscriptions such as these for the ultra-desirable AWQ 3 Roll Sets. Ideally the Mint might out of the goodness of its mechanical heart want to make it possible for its individual collector customers to be able to acquire more than a single 3 Roll Set each for the purpose of gifting or trading, for example. However and most unfortunately so, this arrangement would simultaneously enable the Big Buyers to get back into dominating… Read more »

Ah well, Major D, I do believe that the Golden Rule (Version Number II) applies here, as in “He who has the gold makes the rules.”

Indeed, Tom, yours truly has put his worst fears to rest (well, not quite…I’m still concerned about the threat of nuclear war 😉 ) and is now happily looking forward to a year of adding some great individual coins and sets from the U.S. Mint to his ever-growing collection. Just as a footnote and really no big deal except for those whom this might effect, but I still think that an inactive subscription counts the same as no subscription at all when the Mint tallies up how much of the stock of any given item has been reserved for subscriptions.… Read more »

Wonder if one will be for Amelia Earhart in the future. 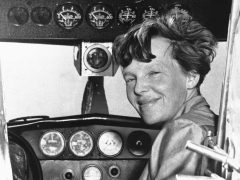 Numismatics and misogyny, but no one ever said you can’t have two hobbies.

We can always hope, Antonio, that Ms. Earhart is already on deck and will indeed be part of this series. If not, since there will likely be others equally worthy whom this cycle of releases might also miss, perhaps the series can be extended at least another year or so to encompass a more inclusive range and selection of especially memory-and-honor-worthy American women.

ah, but coins can only be of deceased people. The National Enquirer and other such magazines tells us Ms. Earhart is still alive, just like Elvis….:)

Now see, Tom, this is exactly the kind of thing that can happen whenever I don’t take the greatest of pains to gather all my facts first. In fact, it is quite possible Elvis never did leave the building and Amelia may currently be enjoying her 126th birthday celebration on some uncharted Pacific atoll.