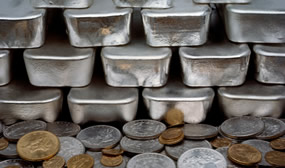 Precious metals tumbled Thursday, dragging gold lower for October and slicing away a sizable portion of the monthly gains in silver, platinum and palladium.

Much steadier on the month was U.S. Mint sales of gold and silver bullion coins. Demand over the prior month more than tripled for the Mint’s American Gold Eagles and its American Silver Eagles are days away from notching a new annual sales record.

"Despite the lack of price movement over the past few months, gold and silver American Eagle [coin] demand has been steady. Investors can see a dark and stormy cloud on the horizon and are preparing their portfolios accordingly," MarketWatch quoted David Beahm, executive vice president at precious-metals investment firm Blanchard & Co. "The government shutdown and the debt-ceiling debacle have really opened investors’ eyes."

Returning to precious metals, gold for December delivery declined $25.60, or 1.9%, to settle at $1,323.70 an ounce on the Comex division of the New York Mercantile Exchange. Gold was pressured from a stronger U.S. dollar, investors booking profits and speculation that the Fed will ease its stimulus sooner than expected.

"Gold prices ended the U.S. day session solidly lower Thursday, in the aftermath of a surprising FOMC statement that the market place deemed somewhat hawkish," said Jim Wyckoff, a senior analyst at Kitco Inc. "Sharp gains in the U.S. dollar index and some end-of-month profit taking were also bearish factors for both gold and silver markets."

Rounding out the precious metals complex on Thursday and for the month:

A snapshot on how the metals have performed in other periods, including the year-to-date, are provided in the following grid.

London precious metal fixings declined on the day but were mostly higher in October. In breaking down the Wednesday PM to Thursday PM bullion fix prices:

As for London bullion fixings in October, gold’s huge daily decline also drove it into the red for an October loss. The other metals gained. The following grid summarizes the monthly, quarterly, and year-to-date changes.

For a second day, United States Mint bullion sales were limited to 1,000 ounces in American Gold Eagles. As for October, CoinNews.net will later publish a more detailed analysis, but in summary:

The melt values of silver coins increased sharply in October to pare a bit from losses on the year so far. The grid below offers current melt values of older circulating U.S. coins that were produced with 90% silver. These coins, at least those that have little to no numismatic worth because they are too common or too worn, are the ones often sought for their silver values.

The above melt values are calculated using London fix silver prices at the end of 2012, September and October.