Bullion Articles and Precious Metal Reports In The Lead – Death Of The Dollar. Film At Eleven.

The recovery process got a bit tougher in precious metals overnight as global investors once again sought refuge under the umbrella of the US dollar.

The "Markozy" plan and commitment to keep the union and the common currency intact by expanding "Le Tarp" was still being greeted with an obvious degree of skepticism despite advances in regional equity markets and yesterday’s commodities’ market recovery. Such recovery turned sour today as funds sold commodities in the wake of the US durable goods orders figures and as European consumer confidence fell to a 24-month low this month.

Thus, the midweek gold trading session opened with minor losses of about $4 per ounce and spot bullion was bid at $1,645.00 in early dealings. Traders remain focused on news from Europe and on the US dollar but some are bracing for a return of volatility in the yellow metal. October tends to be the worst month for gold prices on average, but some are hoping that the late-in-the-month Indian festival season will mitigate some of the potential headwinds that gold faces (say, on the technical side).

Silver prices fell about 70 cents and traded near the $31.20 mark per ounce. Platinum and palladium lost $3 and $5 respectively, with quotes for the former coming in at $1,550 and for the latter at $641 the ounce. And now, for the "good news/bad news" for the platinum group metals category:

Toyota Motor announced that its global auto output rose for the first time in a year in August, while US durable goods orders shrank 0.1% in the same month, primarily on account of an 8.5% drop in bookings for motor vehicles. At last check, rhodium was unchanged with an offer quoted at $1,825 per ounce. In the background, the US dollar was off 0.12 on the index (at 77.65) while black gold lost almost $1 to touch $83.49 the barrel.

Stillwater Mining’s CEO told Mining Weekly that platinum could reach $2,000 to $2,500 next year but that sister metal palladium could move even faster, bringing the gap between the two from its current 41% to perhaps as high as 60%-70%. Four-digit palladium is implied in that event. For the time being, however, the firm called off a planned debt offering, pending a return to "reasonable market conditions."

Speaking of global and US economic conditions, NYU Prof. Nouriel Roubini opines that most advanced economies are tilting back into recession mode while the US is "already in one, based on the hard and soft data." Mr. Roubini does not question the likelihood of a double-dip, but only its eventual severity, and he says that such will depend on "what’s going to happen in the eurozone and whether they can get their act together." In the US, the Professor believes, "we are running out of policy bullets."

The latest projectile to come out of the Fed’s monetary barrel has been code-named "Operation Twist." Some, however, feel that it might better be called "Operation Twit" as it will prove about as ineffectual as putting out a grease fire with water, especially as it runs somewhat… counter-trend to what the Treasury is doing at the same time.

One such magic "bullet" however, at least in the opinion of certain Bloomberg-polled economists, is President Obama’s recently announced $447 billion jobs plan. The program, if enacted, would avert America’s dipping back into contraction mode economically speaking. It might, in fact, add about 0.6% to the nation’s gross domestic product and could knock 0.2% off of the unemployment rolls.

Don’t look now, but the "waterfall" dollar just recorded its largest month-on-month advance against the euro since November of last year. The Nosferatu greenback got an adrenaline boost following announcements that the Fed and four other central banks would provide 90-day dollar loans to banks in order to make sure that they have sufficient amounts of currency on hand through year-end. See the Fed as lender of last resort. See the dollar as currency of last resort. Patience among folks such as Ron Paul is running out. Patience among dollar-mortician hard money newsletter writers has long ago run out.

But, hey, there is real hope now for the demise of the dollar. Yes, you read it correctly: the good old greenback is possibly about to meet its maker and die a slow, quiet death. Possibly. The reason? Not what you think: not the "unsustainable" debt-loads, not the "drunken sailor spending" by the "Gubmint," not the "24/7/365 running of the Obama printing-press," etc.

No, the reason is that the dollar (the bill, that is) simply costs too much to keep it alive. New efforts are once again underway to replace the paper bill with a less costly, more durable (by a long-shot) metallic version: the Dollar coin. And, guess what? Despite the memory of what happened the last time a dollar coin was introduced with largely the same aims, the American public is 65% in favor of killing off the paper buck.

Take a cue from us Canucks, eh? We did it, and so can you. Life with coins (nice, long-lasting, shiny ones, as made by the Royal Canadian Mint) is perhaps a pain in the pocket but not a pain in the… hind quarters. The $3 to $5 billion in annual savings might just be worth it, especially at a time when y’all are seeking to cut-what?-$1.5 trillion from your deficit. Bye, George. 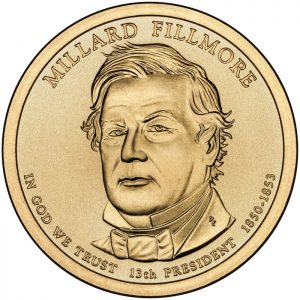 Until tomorrow, hang on to that buck as tightly as you can. Or, turn it in for some palladium (now) on sale.