Precious metals markets opened firmer this morning as the passage of the austerity budget measures by the Italian Senate gave comfort to certain market participants who have been pinning hopes (and trading positions) on the avoidance of a eurozone meltdown lately.

Gold received a $14 lift out of the starting gate and traded at $1,772 the ounce. The $1,730-$1,780 channel appears to be confining the yellow metal for the moment, but do not discount the possibility of out-sized moves yet to come- it all hinges on news from Europe at this time. The Dow surged by over 200 points on the Italian Senate news, for example. Let’s see: Dow up = Can gold be far behind? That’s the new ‘normal’ for ya. Gracias, hedge funds. De nada.

Silver made a tenuous, 6-cent advance to open at $34.09 but fell back to under the round figure shortly after it opened. The white metal continues to exhibit a worrisome disconnect vis a vis gold and its reluctance to join the euro-optimism-engendered party might not bode well for it, or for gold in the medium-term. There was a small amount of trading room chatter yesterday about some MFG positions being unwound but we have no specific confirmation on that matter. Something that is on the other hand confirmed in the wake of the MF debacle is the fact that the CFTC is now reviewing about 120 other futures brokers in order to make sure that they are segregating customer funds from house funds.

In other global news, China’s trade surplus broadened last month but by less than had been projected by economists, as some of its key export recipients appear to be slowing down (see: Europe). Even some commodity-centric economies such as Canada appear to be experiencing an ebb in Chinese imports at this time. Earlier this week, commodity bulls ascertained the news of cooling inflation in China as a major positive.

"Not so fast," we might say. More importantly than the inflation metrics, China’s bank lending activity swelled in October (to 9.27 billion dollars). The analytical team over at Standard Bank (SA) feels that China’s recent inflation figure does lend support on the downside to industrial metals but that its lending data tends to have the second-largest influence on commodity prices.

Such data, "within the context of a Chinese clamp-down on inflation, remains one of the greatest obstacles to stronger commodity demand and greater support for prices."

The SB team opines that until ‘substantial’ easing takes place in China demand for industrial commodities should remain ‘lacklustre.’ There might be exceptions to that rule; see the next section.

Platinum gained $13 this morning and it opened with a bid of $1,633 per ounce while palladium advanced $6 to start the final session of the week off at $653 the ounce. No change was reported in rhodium at $1,675 bid. The fundamentals’ related picture in the platinum-group metals space continues to show supportive conditions for medium-term price improvement in them. The supply/demand paradigm in the group is unlike that which is currently at play in either the gold or the silver markets.

A notable decline in mining output (down 5.4% on a year-on-year basis) coming from South Africa was heavily influenced by a shrinkage in the production of mined platinum-group metals. The ebb in pgm output was responsible for more than a third of the overall mine output decline. Meanwhile, Mining Weekly reports that palladium demand is expected to grow by 5.8% annually, from 2010 to 2020 and reach a level above 10 million ounces. A "significant" shortfall in supply might materialize in palladium before 2015 and the surplus that the market has tallied in the past six years could evaporate along with the inventory of Russian state-owned metal next year.

Speaking of mine production and its corporate sources, the "Reformed Broker" Joshua Brown remarks in a "note to David Einhorn" (he of a very bullish tilt on mining firm equities) that the sector that was supposed to offer great leverage to a rising gold price has done… anything but. This comes from a man who is long in this sector and who would like to see it finally "deliver." Quote:

"Gold mining stocks used to be thought of as “leveraged plays on gold”. If that were actually true, these stocks would have done their job for investors over the last few years as the price of gold has soared. But these stocks have been moribund and awful, an unforgivable sin. They’ve wrecked the opportunity for their shareholders through dilutive secondaries, insider sales and hedges. $GDX is up from 56 to 60 since the first quarter of 2008, an absolute joke when you consider that the metal itself (look at $GLD) has doubled in value. The failure of the large cap miners to capture that for holders is epic and should be a much bigger story.

In fact, not only are the miners not leveraged plays on gold, now the opposite is true: they are discounted plays on gold. In fact, some of them would be worth more if there were only the actual ore reserves and no corporate apparatus sucking the good stuff out in the name of “value creation”. Perhaps this is what’s attracted Einhorn’s fund to them in the first place but he should understand that a miner will part from his mining operation when you pry the shovel from his cold, dead hands – there will be no “constructive discussions with management about unlocking shareholder value” in this sector.

Thursday’s sizeable sell-off in gold (to just under $1,735) gave way to this morning’s partial buying back of positions basically in lockstep with the ebb and flow of speculative fear and/or optimism related to the European turmoil. Whether or not gold ekes out a gain on the week may not be as material as the fact that this week witnessed the return of significant volatility and non-traditional correlations (see: equities) in the yellow metal. Bullion is still largely being treated as an "opportunity" trade and less like a shelter from the financial storm that is sweeping Europe. Given the intensity of the drama of the past ten days, the real question to ask is why gold has not taken out its previous highs by some hefty margin already.

At any rate, the aforementioned drama is showing some incipient signs of de-escalation now that Greece has a new Prime Minister and now that Italy is about to get one as well. The passage of the belt-tightening measures by the Italian Senate basically paves the way for the country’s President, Mr. Napolitano, to offer the PM job to former EU commissioner Mario Monti perhaps as early as Sunday. Mr. Monti will certainly have a job best suited to "Super Mario" when he takes the helm of the badly listing Italian ship.

However, that vessel is not suffering from a fatal hull breach, as many fear-mongering newsletters might have you believe. In fact, Italy’s deficit-to-GDP (at 4.6% last year) is not unlike that of… Germany (at 4.3%) and is in fact smaller than that of France. Of course deficit is not the same as debt, and we do not mean to minimize the urgency of having to slash the 120% of GDP debt ratio that the country currently finds itself in. But if you ask "Will Italy pull through this?" then we would offer you a resounding "Why, yes, of course it will."

Something else that doomsday newsletters have been latching onto of late is the idea that the ECB will print mountains of money and turn into the lender of last resort to the region’s troubled entities. Despite assertions from the ECB’s Juergen Stark to the contrary, the chants of "Print! Buy Bonds! Print!" and the putative hyperinflation that such a strategy will "invariably" give birth to, have grown louder this week.

One such "singer" is none other than Portuguese President Anibal Cavaco Silva. Of course, he did not mention what ‘benefits’ such a program might have for the shaky bonds being issued by… Portugal. At least as far as another ECB Council member, Mr. Klaas Knot, is concerned, Mr. Silva might have to keep his hopes on ice in a glass of fine Porto for a while.

Mr. Knot asserted yesterday that the ECB "can’t do much more" to fix the debt crisis and that the institution is not amenable to ratchet up its bond purchases just to assuage the anxiety-ridden markets (and government officials such as Mr. Silva) out there. BTW, if you are wondering why Mr. Silva might be so… vocal, consider the little factoid that the cost to insure Portugal’s bonds against default stands at 1,072 basis points versus 569 b.p. for Italy and 93 (!) for Germany and that the Portuguese economy is slated to shrink some 3% in 2012. The philosophical debate in the EU is once again (after the immediate ‘fire’ is extinguished) shifting towards whether or not the ECB (and/or the EU plus the IMF) should pay for the former lack of discipline and restraint by some of its members.

One EU member who is furious these days is France. A major "faux pas" by rating cop firm S&P has resulted in an outburst of critical words by French Finance Minister Francois Baroin. S&P is saying that a "technical error" caused the automatic dissemination of a note to clients that it intends to downgrade its view of France’s economy.

The glitch was characterized by Monsieur Baroin in La Tribune as "a shocking rumor of information that has no foundation" and resulted in S&P having to reaffirm its AAA rating on the country that represents the EU’s second-largest economy. S&P also had to offer the statement that it is "investigating the cause of the error." Sacrebleu! Pardon! S&P might not make many a Christmas card list this year…

We leave you now with some very fun material to ponder and gawk at during the weekend. Our friends at GoldBarsWorldwide.com have just updated their supplement pages to include some stunning facts and images relating to the American Eagle and American Buffalo coin ranges. The in-depth descriptions and production details alone are worth your visit if you are an American coin aficionado.

But wait, there’s more! The technical team at the prestigious Perth Mint Down Under has come up with the ultimate gold… coin. As things stand right now, they can lay claim (and hold on to that prize, likely forever) to the world’s LARGEST gold coin –at least in terms of its weight: ONE metric tonne. That’s 32,150.70 troy ounces, that’s 2,200 lbs., that’s like $50 million bucks, that’s like… unreal. Behold (but make sure you visit the link above, as the picture is guaranteed to be better): 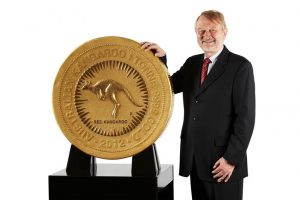 and the 1.000 Kilo ‘Roo that took a year-and-a-half to manufacture.

Have a nice weekend.