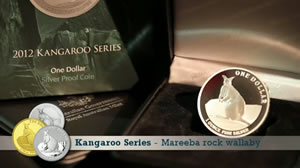 The Royal Australian Mint has published its numismatic product schedule for calendar year 2012 which covers its range of product releases from September 2011 through to August 2012. The Mint also released a video describing several of the offerings.

Additionally, the Royal Australian Mint launched a new program entitled "Collection by Selection" where collectors can use a simple order form to pre-order and pre-pay for upcoming products, thereby locking in prices. Collection by Selection orders are automatically shipped when a selected product is released, and ahead of other normal orders.

In describing pre-order advantages of the Collection by Selection program, the Royal Australian states:

"That’s right, this simple order form will allow you to order products from the 2012 foundation range, pay the total cost upfront and then receive each coin as they are released, it couldn’t be any simpler. But the real advantage to you is that your 2012 collection is then secured. You will also benefit further by receiving free gifts and depending on your total payment an exclusive opportunity to order a coin with a limited mintage of 500 or 1000…

By ordering this way, where you just pay one total upfront payment, you can feel comfortable in the knowledge that your order is locked in and won’t be affected by future price rises or additional postage fees.

If a new product is added outside of the Mint’s planned product schedule then you will get a sneak peak before the general public even knows about it and of course you will still enjoy access to our ballot program for those very exclusive mintage products."

The following schedule includes mintages and prices for each product:

The Mint was commissioned to produce Australia’s decimal coinage, which was to be introduced into circulation on 14th February 1966. The Royal Australian Mint holds a place in history as the first mint in Australia not to be a branch of the Royal Mint, London.