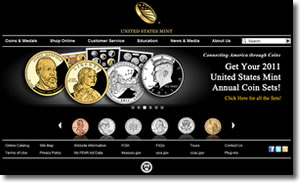 The United States Mint on Thursday updated its 2012 numismatic schedule, adding a handful of products for release in March, April and May.

Major releases include the Star-Spangled Banner commemorative coins which celebrate the bicentennial of the writing of American national anthem, issuance of the Chaco Culture National Historical Park Quarters for New Mexico and the Kennedy half-dollars.

A new product appears to be revealed as well, and is simply named the "2012 Birth Set."

A listing of the updated schedule along with expected release dates follows:

Which of course occurred in 1814, not 1812, following the Battle of Ft. McHenry in September of that year. But who cares about American History these days.

George, I guess the Congressional legislator for the commemorative bill AND the U.S. Mint failed to due diligence by, of course, running it through Wikipedia first!!! OOPS! Oh well, what’s a couple years off anyway. Just a mere little detail!

I would prefer the anniversary be closer to reality. This is obviously more a War of 1812 commemorative coin, but after all the war related commemorative coins (Army, Medal of Honor, Infantry, 5 Star Generals in 2013) lately, the Star Spangled Banner is a welcome change, even if it too is war related. As for the birth set, other mints (Canada, UK) have been offering birth sets for years. I wonder how much extra they’ll charge for this packaging of the standard proof set. Personally I’ve given proof silver eagles as keepsakes. I think the coin is much prettier, has… Read more »

We would all hope that the Mint would not become even more inept but their actions speak for themselves! There should be an impartial and competent person who speaks for the collectors. This person would have a voice in the timing and quantities of releases (the voice of reason). They seem to consistently miss the mark in both directions i.e. too many quarter varieties and too little Anniversary issues! Collectors miss Mint releases by not having release information far enough in advance and are forced into the secondary market… Many other potential benefits for both the Mint and Collectors. George… Read more »

Just bought a 2011 ARMY uncirculated Silver Dollar at a coin show for $42.00. COA, OGP, everything complete, and the coin itself is very clean. Did I just get lucky or is there some downward pressure on this coin’s price all of a sudden??