The United States Mint on Thursday, August 18, 2011, ceremoniously released the Rutherford B. Hayes Presidential $1 Coin and also began selling rolls of the dollars for $39.95 each, plus shipping and handling.

Each of the rolls contains 25 circulation quality coins, and buyers have a choice of rolls coming from the United States Mint facility in Philadelphia or Denver. The Mint’s wrapping paper is specially designed in black and white to feature the mint of origin ("P" or "D"), "Presidential $1 Coin," the president’s name and "$25," which is the face value of its contents.

By law the U.S. Mint program (http://www.usmint.gov/mint_programs/$1coin/) is scheduled to run through at least 2016, although certain members of Congress recently proposed legislation that would end the series early.

Designing and sculpting both sides of the coin was United States Mint Sculptor-Engraver Don Everhart.

The coin’s edge contains the inscriptions "2011," "E PLURIBUS UNUM" and the mint of origin. 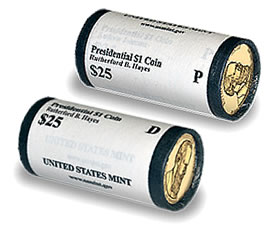 New dollars are also available through the United States Mint Online Subscription Program. Presidential $1 Coin Two-Roll Sets are $79.90 per unit and has a face value of ($50). The program is structured similar to a magazine subscription, to help collectors keep their Presidential Dollar collection current.

"The Presidential $1 Coin series connects us to the wellspring of our nation’s greatness and the many stories that unite us," said Marc Landry, Acting Associate Director of Manufacturing at the United States Mint. "One of those stories is captured at Spiegel Grove, the beautiful place where President Rutherford B. Hayes retired from elected office but remained a dedicated public servant, helping veterans, improving prisons and fighting for universal education."

Finding new coins in pocket change, however, usually takes quite a long time, so there are alternatives.

In addition to the 25-coin rolls, the dollars are and will be available in several other collectible products, including:

Rutherford B. Hayes graduated from Harvard Law School and later served as an officer in the Army during the Civil War. Despite being wounded in action more than once, he was elected to the House of Representatives in 1865 and later served three terms as the Governor of Ohio between 1867 and 1876.

Winning the Presidency during the election of 1876 was quite controversial, as he lost the national popular vote but won by one vote in the Electoral College. His term lasted from 1877-1881 and he did not run for re-election. Upon retiring from office, he returned to the Spiegel Grove Estate, his home in Fremont, Ohio. He died in January 1893 at the age of 70.

My sons have several of these coins given to them by a great uncle (simply from a drink machine?! strange, I think) Will they be more valuable than a $1 someday or should we just spend them?

Thanks for any insight.

how much are these dollar coins cost? well, right now in 2012 im hoping at least 50$

hey there i have a $1 rutherford coin but i think it is a misprint because on the statue side it is upright but when you turn to the president side it is upside down. any collectors know the cost of a misprint of this one?

In the roll I received from a friend, when looking at president, I flip it over and Lady Liberty is upside down, are they meant to be that way?

Hello!
Can you please tell me what the Rutherford B. Hayes commemorative $1.00 Presidential coin is made of? Thank you!