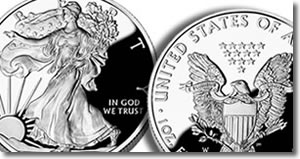 "The State of U.S. Coins and Currency" was discussed today by the House Subcommittee on Domestic Monetary Policy and Technology.

And topmost interest for collectors, the hearing revealed the possibility of amending law to approve the minting of 2010 American Eagle Silver Proof and Uncirculated Coins at the the expense or producing fewer bullion versions.

Led by Chairman Melvin L. Watt, representative from North Carolina, and ranking minority member Representative Ron Paul from Texas, the subcommittee had several lines of questioning as it related to U.S. coins and currency.

While many topics were discussed including coin compositions, coin designs, coin counterfeiting and the use of coins by the public — one of the main areas of interest revolved around the American Eagle program. US Mint Director Moy opened this area of concern in his testimony with this statement:

However, as anyone with a glancing knowledge of the coin collecting world knows, last year the Mint was not able to keep up.

"We had no difficulty in obtaining gold, silver and platinum in raw material form, but we experienced considerable difficulty in getting this raw material fabricated into planchets by our vendors in sufficient quantities to meet public demand," added Moy.

As such, it initiated two measures. First, the Mint established an allocation system for its network of authorized purchasers in which they were only shipped a portion of their requested order based on their past order history. Second, as the Mint is required by law to strike the bullion coins to meet demand, it canceled proof and uncirculated versions of the gold and silver eagles.

Struck for numismatic interests, the proof Silver Eagles have been available from the Mint since the debut of the American Eagle program back in 1986. The numismatic uncirculated Silver Eagles were added in 2006. These annual coins, however, came to an abrupt end for the first time in 2009 as all available planchets, or coin blanks, were dedicated to bullion production.

To alleviate this situation in the future, Moy suggested that Congress follow through with the request that it allow the Treasury Secretary to approve the striking of the collector coins.

"I am encouraged to know that the Subcommittee is exploring the possibility of an amendment to the law that would afford the Secretary the authority to approve the minting and issuance of American Eagle Silver Proof and Uncirculated Coins even when we are unable to meet the public’s demand for the bullion versions of these coins," stated Moy.

"We can mint 200,000 per month, and if we can begin by September, we will be able to produce about 830,000 one-ounce silver American Eagle coins to meet collector demand for this product in the remaining months of 2010," Moy added.

Michael B. Clark, President, Diamond State Depository took it one step further in his testimony. Clark’s company is a subsidiary of Dillon Gage, Inc., one of the U.S. Mint’s 12 authorized bulk purchasers for U.S. American Silver Eagles.

"At the heart of the problem is the Mint’s inability to source sufficient planchets (or blanks) from multiple producers," explained Michael Clark about the Mint’s Eagle production issues. "Its reliance on just three suppliers is flawed."

To rectify the planchet shortage, Clark recommends that Congress direct the General Accountability Office to review the Mint’s policy of only using those three planchet suppliers and make recommendations on what could be done to improve the bottleneck.

Earlier this year, Mr. Moy had indicated the potential to increase the supply of planchets, but at a cost of the Mint committing to exceedingly high order levels for many years into the future.

Whether any changes will occur from this hearing, only time will tell. One thing is certain, however, many are interested in the outcome as it relates to this year’s American Eagles.

Sorry, Darrin, but “irregardless” (last sentence, next-to-last paragraph) is not a word, and is in itself a double-negative.

Darrin, you have a kindred spirit in Sarah Palin.

[…] that without Congressional intervention the same will happen in 2010. U.S. Mint Director Ed Moy recently testified before a House Subcommittee on the topic. He urged members to give the Treasury Secretary the […]

[…] topic was not discussed to the same degree as changing coin compositions or producing proof American Silver Eagles at the expense of the bullion versions. However, it tied into the latter as a partial solution one […]

Sorry guys, Webster added irregardless to the dictionary several years ago as a word meaning the same as regardless.

[…] to produce all American Eagle Silver and Gold versions, as recommended by Mint Director Moy during the July hearing. Provisions in the bill’s "Technical Corrections" section would amend Section 5112 […]