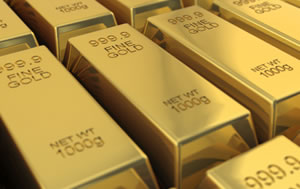 Ron Paul wants full transparency when it comes to American gold reserves. In response to legislation seeking to verify the existence of U.S. gold reserves and the accuracy of records accounting for those reserves, the U.S. House Financial Services Subcommittee on Domestic Monetary Policy and Technology held a hearing last week entitled: "Investigating the Gold: H.R. 1495, the Gold Reserve Transparency Act of 2011 and the Oversight of United States Gold Holdings." The subcommittee is chaired by Congressman Ron Paul of Texas, who also happens to be the individual who introduced the legislation.

Paul’s opening remarks at the hearing alluded to the fact that much speculation has taken place in the past by the public about the gold reserves held by the U.S. government, including whether it exists at all. The government’s response to that speculation, he added, was to dismiss them rather than address them.

"It should not require the introduction of legislation or a congressional hearing to gain access to this information," Representative Paul noted in his opening comments during the Investigating the Gold hearing. "This information should be published and available to the American people. This gold belongs to the people, especially since much of it was forcibly taken from them in the 1930’s. The government owes it to the people to provide them with the details of these holdings. We would greatly benefit from a full, accurate inventory audit and assay with detailed explanations of who owns the gold and who is responsible for ownership, custody and auditing."

Speaking before the subcommittee on the subject of the gold reserves were Eric M. Thorson, the Inspector General of the Department of the Treasury, and Gary T. Engel, Director of the Financial Management and Assurance at the Government Accountability Office (GAO). Both prepared written statements for the committee, presented oral statements and answered questions by the committee.

It became immediately clear that Mr. Thorson of the Treasury Department felt that the proposed Gold Reserve Transparency Act of 2011 was not required and that its enactment would only duplicate audits already completed by the Treasury and the United States Mint.

"I want to make one point very clear," stated Eric Thorson of the Treasury Department in his opening remarks. "100% of the U.S. government’s gold reserves in the custody of the Mint has been inventoried and audited. Furthermore, these audits found no exceptions of any consequence."

Thorson in September reportedly became the first outsider in 37 years to enjoy full access to U.S. gold and silver reserves at Fort Knox.

In response to a question at the hearing about the cost of implementing the legislation, Thorson said he believed the United States Mint had worked up some numbers that it would be "somewhere above $60 million or more," adding the question would be best directed to the Mint. Engel noted that when assaying U.S. gold reserves, it would also require "taking a part of the bar to be tested, and that’s basically destroyed." The assaying process for all the gold bars, therefore, would add deeper costs.

If passed, H.R. 1495 would require the Treasury Secretary to complete a full assay, inventory and audit of all U.S. gold reserves to be finished within six months following the enactment of the Act. It would further direct the GAO to review the results of that inventory and make a report to Congress on the matter.

According to both the testimony of the individuals as well as records produced by the Department of the Treasury, the United States Mint currently serves as the custodian for 245,262,897 troy ounces of gold which is placed in deep storage. This accounts for approximately 94% of the total U.S. gold reserves. An additional 1% is used by the United States Mint for coin production purposes with the remaining 5% held by Federal Reserve Banks.

Before any legislation can become law, it must pass in the U.S. of House of Representatives, the U.S. Senate and get signed by the President.