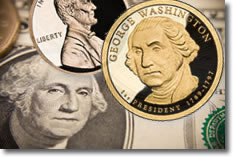 The United States Mint has once again altered its circulating $1 Coin Direct Ship Program in response to continued "abuses" of the system. Effective as of July 22, 2011 the Mint no longer accepts credit and debit cards for any transactions relating to the Direct Ship Program.

Consumers prefer to use paper money over heavier coins in daily transactions, which has stunted $1 coin circulation. (In related news, read about legislation seeking to end dollar coins.) The United States Mint established the Direct Ship Program over three years ago as a method of seeding $1 coins into circulation. Using it, participants are able to order large quantities of $1 coins at face value and without having to pay shipping or handling charges.

Almost immediately, however, it became apparent that some were using the Direct Ship Program only for personal gain. Reports surfaced that buyers were using credit cards to make massive purchases, and then returned the $1 coins to local banks for cash instead of spending them on goods and services. The practice was not only counter to the program’s intent, but it enabled individuals to reap credit card bonuses like frequent flyer miles and cash back points.

In an initial attempt to curb the abuse and get everyone back to using the Direct Ship Program as intended, the United States Mint stated that credit card rewards could not be accumulated in buying $1 coins. It took it one step further by canceling orders of known offenders and placing follow-up inquiries to other customers who made large orders. Finally, limits were established and statements were placed on $1 coin ordering pages indicating that buyers must adhere to the intent of the Direct Ship Program.

While those steps undoubtedly made an impact, it apparently was not enough. Thus, the United States Mint on July 22 completely eliminated the use of credit cards for the program, stating in part:.

The Mint has undertaken several aggressive internal and external actions to mitigate this issue, including restricting chronic and repeated use of credit cards, contacting customers who frequently placed large numbers of orders to ensure they were using the coins for legitimate business purchases, and other measures. While these measures eliminated a significant amount of misuse in the program, we believe some abuse still exists. Eliminating the credit and debit card purchase of the $1 coin is the next step in our efforts to root out abuse in this program and ensure it is better targeted toward fulfilling its intended purpose — which is to get the $1 Coin into greater circulation.

The solution is simple: Do what nearly 50 other countries have successfully done, and eliminate the $1 bill and issue $2 bills or $2 coins to reduce the number of coins needed to make change.

Oh wait, we can’t pass a budget, establish national health insurance, repair bridges and roads, or even “go metric”. So why should it be any less vexing for the pols in Washington to fix a broken coinage system?

Payments can be wire transfered from credit cards so this is not a solution to their problem.