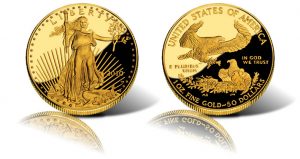 Individual one-ounce 2010-W Gold Eagle Proof Coins are three-quarters on their way to a sell out. Potential buyers not only have that to consider, but also the possibility that Gold Eagle prices could increase on Wednesday.

The likelihood that the U.S. Mint would hike its prices on Wednesday seemed a foregone conclusion… until Tuesday, when the London gold Fix plunged $28.75 to $1,339 an ounce. Later closing New York gold futures prices tumbled $36.10 to $1,336.00 an ounce, adding more pressure to the yellow metal and making any coin price increase doubtful. However, in the early morning hours gold was on a mini-rally, clouding the forecast ever so slightly.

While the Mint has several determining factors for price adjustments, the only one that now matters is the Wednesday London PM fixing, which will be set by 11:00 AM ET. If it rises back above $1,349.99 an ounce, all U.S. Mint collector gold coin prices will increase. The Gold Eagles will go up $50 for the one ounce, $25 for the half ounce, $12.50 for the quarter ounce, $5 for the tenth ounce and $92.50 for the four-coin set.

As for the latest sales figures which were released by the Mint on Tuesday and have an "as of date" of Sunday, the one-ounce Gold Eagles were the biggest gainers. They advanced another 5,215 to reach 19,195 during their first 11 days on sale. The other three sizes and the 4-coin proof set climbed modestly, as the following tables illustrates:

At the current rate, the individual one-ounce Gold Eagle will sell out before the end of October, leaving buyers the more expensive 4-coin set as the only means of acquiring one directly from the Mint. It would appear the other sizes and set will be available for some time.

Finally, if the Wednesday PM Fix does come in above $1,350, the Mint is likely to freeze gold coin ordering around mid-morning to adjust prices. Other coins that will see increases include the 24-karat First Spouse Gold Coins, which will go up $25, and the 24-karat 2010-W Gold Buffalo coins, which will climb $50.

2010 Proof American Gold Eagle coins may be ordered online through the: