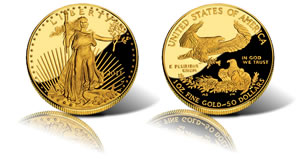 For a second straight week, the United States Mint is expected to raise prices on its collector gold coins.

While the Mint’s coin pricing policy can be somewhat confusing at first glance, after close study it enables buyers to predict when the bureau will raise or lower its gold coin prices. The pricing methodology relies on a weekly average of gold and how that fits within a predetermined range of prices.

The United States Mint increased the amount it charges for a dozen of its gold products last week. That happened when the average of London gold moved into a range between $1,550.00 and $1,599.00 an ounce. Gold has since surged to successive record highs, traversing within a new range between $1,600.00 and $1,649.99 an ounce. As such, the United States Mint will increase product prices if Wednesday’s London gold AM fixing stays above $1,553.70 an ounce and the PM fixing remains higher than $1,600.00 an ounce.

The prices would be the highest ever charged by the United States Mint for its gold coins.

The United States Mint normally adjusts coin prices between 11:00 AM and 12:00 noon ET.