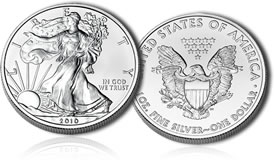 American Silver Eagle bullion coins turned in slightly lower numbers for July 2010 than the month before, according to the most recent figures released by the United States Mint.

While this may come as welcome news to collectors who have been hoping for a decline in the numbers to make way for proof versions, any celebration would be premature. True, sales of the strikes showed a drop of 20,000 units, but put in perspective, the decline is negligible.

Total sales for the month of July still came in at an astonishing 2,981,000. That amount was enough to cement the month as the best ever July since the debut of the coins back in 1986. In fact, it was a leap of 171,000 coins from the previous July record set just last year.

The month also ranks as the seventh best in history for American Silver Eagles. This distinction is not entirely surprising as 2010 has turned out to be a record year. As it stands right now, five of the top ten months for bullion coins have occurred this year.

This is disheartening news for collectors of the numismatic proof and uncirculated versions. As the U.S. Mint is required by law to strike the bullion eagles to meet demand, the collector coins have been suspended indefinitely.

Collectors will recall with grief that the Mint did not produce any last year due to the rush on bullion, and it is appearing more likely that without Congressional intervention the same will happen in 2010. U.S. Mint Director Ed Moy recently testified before a House Subcommittee on the topic. He urged members to give the Treasury Secretary the discretional power to strike numismatic coins even if the Mint was not able to adequately meet bullion coin demand.

If Congress acts quickly and the waiver on bullion production is signed into law by President Obama, there still is hope for the proof and uncirculated coins. Moy indicated they could mint up to 830,000 of them this year, if they can start production by September. However, if Congress fails to act, the demand for the bullion coins may spell another year of cancellations.

Unbelievable. And can you imagine if the 2010 Proof eagles come out??? This is significant news for coin collectors. I think the future of our hobby is getting stronger every year.

[…] Eagle interest (with over five hundred thousand less coins ordered than were sold in the previous month of July), it is also not uncommon. As an example, August 2009 sales dropped by 680,000 as compared to July […]