The commemorative series in gold "Celebrated Physicians of Austria" concludes with a coin for the renowned Viennese doctor, Clemens von Pirquet (1874-1929). 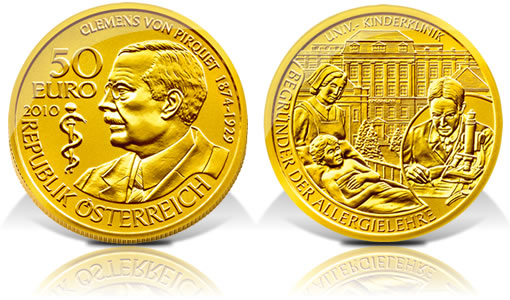 Clemens von Pirquet was born in 1874 just outside Vienna. His father had been a member of the imperial parliament, and had proposed Bertha von Suttner for the Nobel Peace Prize (which she received in 1905). His son would be nominated for the Nobel Prize for Medicine five times, unfortunately without the same success.

Clemens began studying theology in 1892, but soon abandoned it. In 1895 he began his study of medicine in Vienna, continuing in Konigsberg (Prussia) and in Graz where he then graduated in 1900. He then went to Berlin to attend a course in pediatrics. Returning to Vienna, he obtained a position at the St. Anna Children’s Hospital, where he also had good facilities for medical research.

Pirquet was the founder of the study and treatment of allergies. In 1903 he already lectured on the "Theory of Vaccination" and four years later he published his "Clinical Studies on Vaccination and Vaccinale Allergies" which then qualified him as a university professor.

He accepted a position at the John Hopkins-University in Baltimore, but remained only one year, returning to Vienna to become the head of the University Children’s Clinic. Pirquet introduced a number of progressive reforms in the hospital and nursing procedures.

Among other things he established an open-air ward for children suffering from tuberculosis on the roof, and he required trainee doctors in his clinic to undergo a practical course in nursing. He continued his studies into infectious diseases and also nutritional research. He developed a special nutrition system "Nutrition-Unit-Milk" which was the basis of a large scale feeding programme for children in the hungry years after the First World War.

Pirquet was very active in the socio-political arena for the children and was accordingly so respected that he was even considered as a possible candidate for the Austrian presidency in 1928. However, after a life full of service and great medical achievements, Pirquet tragically ended his own life together with that of his beloved but incurably sick wife on 28th February, 1929. Austria and the world had lost a great physician and a wonderfully humane man.

The new 50 Euro gold coin is minted in proof quality only to a maximum of 50,000 pieces worldwide.

The obverse shows a profile portrait of Baron Clemens von Pirquet based on a contemporary photograph together with the series logo of the staff of Aesculapius.

The reverse side shows a nurse with a sick child in hospital. In the background is the University Children’s Clinic. In a rounded insert we see Dr. Pirquet with his microscope engaged in medical research. The legend reads: "Begründer der Allergielehre" (Founder of the science of allergies).

Each coin comes in an attractive box with a numbered certificate of authenticity. A separate wooden collection case can be purchased for the entire series: Gerard van Swieten; Philip Semmelweis; Theodor Billroth and Clemens von Pirquet.

The final coin in the Celebrated Physicians of Austria gold series may be ordered through the Austrian Mint website.

The Mint is the source for all Austrian Euro and Cent coins, whether they are intended for shopping, as an investment or for collection. Before the Euro, the Schilling and Groschen coins were minted, and before that — during the monarchy — Crowns, Guilders and Ducats were struck by the Austrian Mint.

The company is located close to the centre at the Vienna Stadtpark in a Biedermeier building erected under Emperor Ferd.