On 11th February, 2009, the Austrian Mint honours one of the greatest men in the history of medicine with its third gold coin in the series "Celebrated Physicians of Austria" – Theodor Billroth. 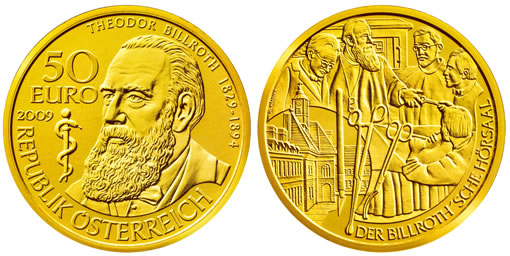 Born on the island of Rügen off the Baltic coast of Germany in 1829, Theodor Billroth had to choose at an early age between his love of music and a career in medicine. He studied in Göttingen and Berlin, and even spent a year studying in Vienna. He gained experience in Berlin and his reputation grew so rapidly that in 1860 he went to Zurich as a professor of surgery. In the following years he rejected posts in both Rostock and Heidelberg, but accepted a teaching appointment in Vienna in 1867.

He pioneered various operation techniques in abdominal surgery and operations on the stomach and the larynx. He recognised the role of bacteria in causing traumatic fever after operations. Billroth further enhanced the safety of operating theatres by the introduction of antiseptics.

In his teaching capacity he trained not only doctors and surgeons, but was also very concerned in the proper training of the nursing staff. In 1879 he founded the Rudolfiner House in Vienna (a hospital with a nursing school attached) to train female nurses; a task that they perform right down to the present day.

To the end Billroth remained an impassioned musician playing the violin, and he was a close friend of such composers as Johannes Brahms. Theodor Billroth died in 1894 just short of turning 65. He is buried in a grave of honour in Vienna’s Central Cemetery.

The new gold coin has a face value of € 50 and shows a portrait of the bearded surgeon on the obverse together with the medical symbol of the Aesculapius staff. The reverse depicts Billroth and his assistants conducting a demonstration operation.  The inset to the left shows the old Vienna General Hospital, where Billroth worked and taught extensively.

The coin is struck in .986 fine gold to a maximum mintage of 50,000 pieces. It is produced in proof quality only and each coin is packed in an attractive box with a numbered certificate of authenticity. A wooden case for the whole four coin collection may be purchased separately.

The series "Celebrated Physicians of Austria" will conclude next year with a coin for the Nobel Prize winner, Karl Langsteiner, the discoverer of the different blood groups.