Hannibal crossed the Alps with elephants, Caesar marched over them, Napoleon rode across, ladies and gentlemen were carried across in chairs, but the Grossglockner High Alpine Road enables the crossing from the province of Salzburg to Carinthia in the south by motorcar, bus, motorbike or even bicycle, and that over Austria’s highest mountain — the Grossglockner. 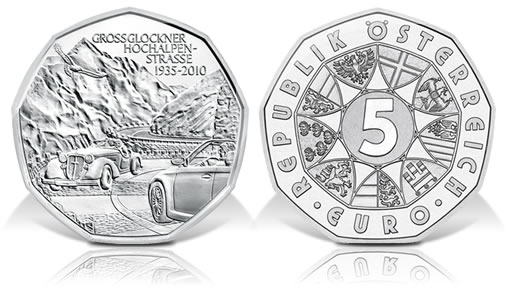 On 3rd August, 1935, the high alpine road over the Grossglockner mountain pass was officially opened to traffic. From 1930 till 1935 during 26 months of construction, 870,000 cubic meters of earth and rock were moved, 115,750 cubic meters of retaining wall were built and 67 bridges were erected.

A total of 3,200 men labored with the fairly simple tools of the day completing in record time this marvel of mountain engineering.

The most famous of all alpine roads leads one through the Hohe Tauern National Park to Austria’s highest mountain, the Grossglockner, and its glacier, the Pasterze. The engineer Franz Wallack planned a road that would fit in harmoniously with its natural surroundings; a feature that has turned out to be a great blessing for the national park.

In 1935 they expected approximately 120,000 visitors per year, but already within three years of its opening that number had doubled. On 48 kilometers of panorama roadway with 36 hairpin bends climbing to a height of 2,504 meters, one travels through a fantastic world of giant mountains.

Today some 900,000 visitors come to Austria’s third most popular tourist attraction. Since 1935 some 50 million people have crossed from Salzburg to Carinthia over the Grossglockner and in this year of its 75th anniversary, they expect to see the 60th million visitor to the Grossglockner High Alpine Road.

To mark the 75th anniversary of the opening of the high alpine road over the Grossglockner the Austrian Mint in Vienna is issuing a silver commemorative 5 Euro coin on 16th June, 2010.

An elegant "old timer" from the days of the original opening in 1935 and a sports car of our own time symbolise the 75 years of the famous roadway’s existence. The other side displays the face value within a circle of the nine shields of the federal provinces of Austria.

This coin is produced in special uncirculated quality for collectors to a maximum mintage of 50,000. They come packaged in a colorful and informative blister pack. Another 250,000 pieces are issued at the face value of € 5 in circulation quality through the banks.

The nine-sided shape results from the nine provincial coats-of-arms.

The coin is available through the Austrian Mint website.

The Mint is the source for all Austrian Euro and Cent coins, whether they are intended for shopping, as an investment or for collection. Before the Euro, the Schilling and Groschen coins were minted, and before that — during the monarchy — Crowns, Guilders and Ducats were struck by the Austrian Mint.

The company is located close to the centre at the Vienna Stadtpark in a Biedermeier building erected under Emperor Ferd.