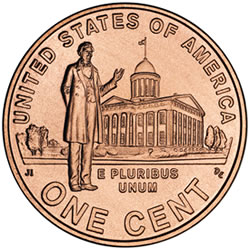 The United States Mint will hold three coin exchanges for collectors and the public to obtain new 2009 Lincoln Professional Life cents at face value on August 13.

Purchases at all locations will be limited to a minimum of two rolls and a maximum of six rolls. Limits are subject to change at any time during the day. All coins are minted at the United States Mint in Philadelphia and are packaged in bank wrapping.

In addition, Lincoln Professional Life penny rolls will be available at the United States Mint’s Web site, www.usmint.gov, beginning noon ET on August 13. Each set contains two rolls of 50-coins-one roll each from the United State Mints at Philadelphia and Denver-for $8.95 plus $4.95 shipping and handling. Orders will be limited to five sets per household.

“Capitol Hill and in the Rayburn House Office Building have been tentatively scheduled for the week of September 13, from 10 a.m. – 3 p.m.”

We have seen the Log Cabin and Log Splitter designs. Doesn’t it seem fitting for the 2010 reverse design to have Lincoln’s hat that he used a portable desk and his pen sitting on his writing.Representing the instruments he used to the save and mend a divided nation