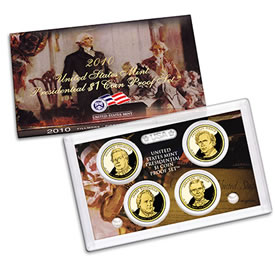 The Presidential Dollar Proof Set has now approached its fourth year of issue, with the first set released in 2007 when the $1 coin series began. The 2010 issue price is $1 more than last year.

The annual 4-coin proof collection has proven to be popular with collectors, although the circulating $1 coin versions have had less success with a public who mostly prefers using dollar bills. The latest US Mint sales figures indicate 622,391 of the 2009-dated sets — which were taken off sale with the release of the new sets — have been sold.

Each of the presidential coins has a common reverse while the obverse, or heads side, bears a portrait honoring a past President. The 2010 set includes four presidential proof coins featuring:

With the inclusion of the popular Lincoln coin, this year’s set sales are expected to top those from 2009.

These coins bear the "S" mint mark, denoting they were struck at the United States Mint at San Francisco. The mint mark is inscribed on each coin’s edge, along with "E PLURIBUS UNUM" and "2010".

The set is priced at $15.95, plus $4.95 for shipping and handling. The Mint indicates that there are no order limits in place. They may be purchased online through the Mint page:

Presidential $1 Coin Products – click through to any of the 2010-dated offerings.

The 2010 Presidential $1 Coin Designs were released in December. The Millard Fillmore Presidential $1 Coin will begin circulating in public change on February 18. The remaining dollars are scheduled for circulation release on May 20, August 19 and November 18. (See $1 release dates for additional information.)

The series is scheduled to go through at least to year 2016, with the following coins by year:

I received 25 sets of the 2010 Presidential Dollar Proof Sets on Feb. 19th. Most of the Lincoln coins had bumpy, bubbly surfaces on the field. All of the display cases were full of dust, lint, debris and particles. I will be returning all 25. These were the worst looking proof coins I have ever received from the US Mint.

What metal are the Presidential $1 Coin Proof Sets mints made of?

The $1Presidential proof set is made from the following materials:
Copper with manganese brass clad (copper 88.5%, zinc 6%, manganese 3.5%, nickel 2%)