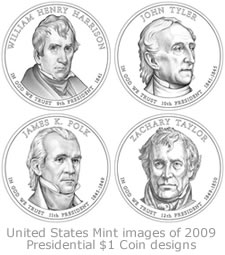 The Presidential Dollar Proof Set has now approached its third year of issue, with the first set released in 2007 when the $1 coin series began.

The annual 4-coin proof collection has proven to be popular with collectors, although the circulating $1 coin versions have had less success with a public who mostly prefers using dollar bills. The latest Mint sales figures indicate 869,202 of the 2008-dated sets — which will be discontinued with the release of the new sets — have been sold.

Each of the presidential coins has a common reverse while the obverse, or heads side, bears a portrait honoring a past President. The 2009 set includes four presidential proof coins featuring:

The US Mint provides the following proof coin description:

These coins have the "S" mintmark, showing they were produced at the United States Mint at San Francisco.

The set is priced at $14.95, plus $4.95 for shipping and handling. The Mint said no order limits are in place. When available, they may be purchased online through the Mint page:

The 2009 Presidential $1 Coin Designs were released in late 2008. The William Henry Harrison Presidential $1 Coin will begin circulating in public change on February 19. The latest Mint product schedule shows a release timeline of Spring, Summer and Fall for the second, third and fourth 2009 $1 coins.

The series is scheduled to go through at least to year 2016, with the coins by year: