Official Baltimore Auction Set for March 2-6, 2010, Promises to be Spectacular

IRVINE, Calif. — Ponterio & Associates, Inc., the world and ancients auction division of Bowers and Merena Auctions, is sure to dazzle bidders once again when it brings to auction a diverse and important selection of International Banknotes as part of the Official Auction of the March 2010 Whitman Coin & Collectibles Baltimore Expo. 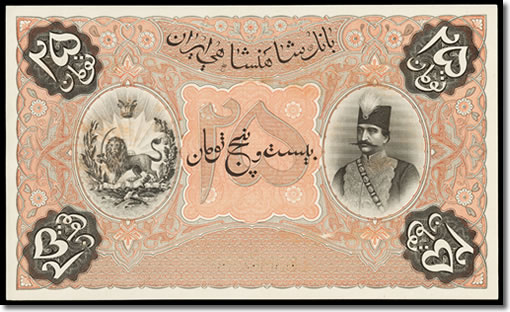 This Iranian 25 Tomans banknote is one of many International currency highlights in the upcoming Ponterio & Associates March 2010 Baltimore Auction. (Click Image to Enlarge)

The sale, which will feature a wide variety of coins and banknotes, will be conducted March 2-6, 2010, alongside Bowers and Merena’s Official Baltimore Auction offering rare United States coins and currency.

"Continuing our successful relationship with the Whitman Coin & Collectibles Expo," observed Bowers and Merena executive vice president Rick Ponterio, "our March 2010 Baltimore Auction will feature a particularly impressive selection of International Banknotes that are sure to result in spirited bidding among specialized collectors. In short, if you have a passion for these important pieces of monetary history, you do not want to miss this sale!"

Matt Quinn, director of currency auctions, added, "Among the headline notes in this auction is a remarkable Iranian 25 Tomans specimen front/back pair. Attributed as P-6s and dating to circa 1890-1923, these notes are Uncirculated and offer tremendous eye appeal as well as undeniable rarity."

Quinn also called attention to a seldom-seen Indian P-9c 50 Rupees note (undated, circa 1930) that he describes as Fine. "One of only a handful of examples of this type that I have ever seen, we anticipate tremendous excitement on the auction floor when this note opens for bidding."

High-quality images and expert descriptions for all coins and notes in the Ponterio & Associates March 2010 Baltimore Auction will be available at the firm’s website, www.bowersandmerena.com. Online bidding will also be enabled at the same web address beginning in mid-February. To order a printed catalog, or to find out more about the live auction or other bidding options, call Ponterio & Associates toll free at 800.458.4646.

Bowers and Merena Auctions was founded in 1983 and has grown to become the world’s preeminent numismatic auctioneer with more than half a billion dollars in rare coin and currency sales. They continue to serve as Official Auctioneer of the Baltimore Coin and Currency Conventions three times every year. Bowers and Merena has handled four of the five most valuable United States coin collections ever sold, including the Louis E. Eliasberg Sr. Collection, the Harry W. Bass Jr. Collection, the Garrett Collection for The Johns Hopkins University, and the Norweb Collection. Bowers and Merena Rare Coin Galleries offers direct buying and selling of exceptional quality gold and silver rare coins.