IRVINE, Calif. — Ponterio & Associates, a division of Bowers and Merena Auctions, will bring 1,250 lots of world paper money to Baltimore, Md., as part Bowers and Merena’s Official Auction of the Whitman Coin and Collectibles Baltimore Expo scheduled for November 10-14, 2009. 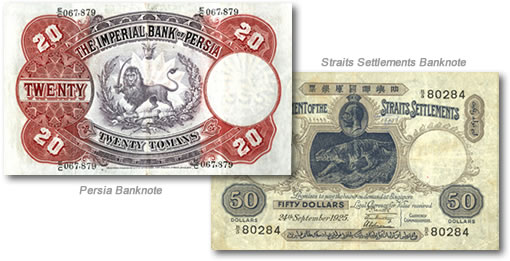 The auction will take place at the Baltimore Convention Center and includes an impressive world catalog presented in four sessions.

Currency highlights include more notes from the popular "East Bay Collection" set to cross the auction block. One of the notable countries with an impressive variety is Iran, which will be illustrated by many Imperial Bank of Persia issues, always sure to garner considerable attention. One of the highlights of the Iranian notes is a 20 Tomans 1925 Pick-15 in a strikingly original Very Fine grade.

More impressive notes will be displayed from countries of the British Commonwealth with a lovely selection of Straits Settlements highlighted by a Pick 12a Fifty Dollar note in an attractive Fine grade.

Other countries of interest offering a pleasing assortment of scarce to rare notes includes Brazil, Canada, China, Columbia, Costa Rica, Danzig, Great Britain, Ireland, Italy, Russia, and Scotland. In addition, several other scarce to rare notes will be offered which include many stunning issued and specimen pieces from tough locations and issuing authorities.

All lots and images in the Bowers and Merena Official Auction of the Whitman Coin and Collectibles Baltimore Expo and world sessions presented by Ponterio & Associates can be viewed online at www.bowersandmerena.com, and printed catalogs are available upon request by calling 800.458.4646.

For more information about Bowers and Merena’s Official Auction of the Whitman Coin and Collectibles Baltimore Expo in November, call 800.458.4646.  For media inquiries, ask for President Steve Deeds. Complete prices realized for all past auctions are available at www.bowersandmerena.com.