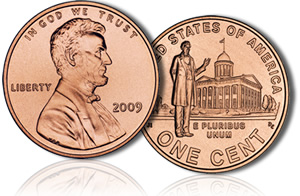 The US Mint will launch the third design of the 2009 Lincoln Cents on August 13, 2009 during a ceremony held on the Old State Capitol grounds in Springfield, Illinois at 10 AM (Central Time).

Lincoln actually served in the Illinois General Assembly and practiced law right across the street from the capitol. As such, this coin is dubbed ‘Professional Life in Illinois.’

Children who attend the ceremony will receive a free shiny penny featuring the new design, and adults will be offered the opportunity to exchange money for rolls of the new cent provided by Chase Bank. During the second ceremony for the Lincoln Rail Splitter launch in May, a limit of six rolls was put in place per adult. That same limit will be adhered to during the third release, according to a Mint statement.

Those unable to attend the event in Illinois will able to purchase Professional Life penny roll sets from the US Mint beginning at noon Eastern Time, also on August 13th.

The sets will sell for $8.95 with a limit of five units per household. As with most US Mint orders, a shipping and handling charge of $4.95 will be added to each order.

Those interested in ordering the two-roll sets may do so at the US Mint website, www.usmint.gov, or they can call the Mint using their toll-free number, 1-800-USA-MINT.

A cent subscription program is also available right now for those wanting to insure they receive the ‘Professional Life’ coin as well as the final design for the 2009 Lincoln Cents, the ‘Presidency.’

For a fascinating historical account of the penny, read The Lincoln Cent: Endearing Art Duplicated Over 450 Billion Times by collector and author Scott Barman. CoinNews Media Group also offers a brief overview of the penny and its changed since 1909 at Lincoln Pennies.