The Royal Canadian Mint’s Winter 2010 Collection is here! The Mint has just released its first new collector coins of 2010, choosing the distinguished celebration of the Canadian Navy’s centennial as the theme of its 2010 Silver Dollar. 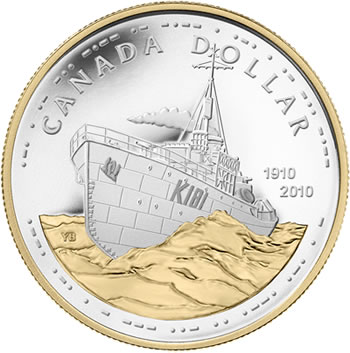 This flagship of the Mint’s annual collector coin program is joined by the newest editions of annual releases consisting of $100, $200 and $300 face value gold issues, as well as proof, uncirculated and specimen coin sets featuring popular icons of Canada. Starting with the ever-popular annual proof set, the Royal Canadian Mint is pleased to share insight into the winter collection through a series of special CoinNews articles over the coming weeks.

Canada’s traditional circulation coins shine in this creme de la creme of premium collector sets. Each coin is struck in sterling silver (except for the one-cent coin and Common Loon dollar) with the breathtaking crispness that can only be achieved by combining the brilliant background with the frosted details of a proof finish.

This stunning finish is taken to the next level by the silver dollar commemorating the 100th Anniversary of the Canadian Navy. Its uplifting design is selectively plated in gold — which is exclusive to the Mint’s 2010 Proof Set — making it the irresistible focal point.

The same design is reproduced on a selectively gold-plated proof dollar coin, which is exclusive to the Mint’s 2010 Proof Set.

The 2010 Proof Set is a stunning must-have on two fronts. Its commemorative silver dollar has been meticulously plated in gold for a unique, eye-catching tough. What’s more, it’s combined with the proof version of Canada’s traditional circulation coins, including the rare and prestigious 50-cent coin.

No order limits are in place, but mintage is limited to 55,000 sets worldwide. To order from anywhere in the world, visit:

Canadian and US collectors may also purchase the set through the Mint’s toll-free number:

[Interested in other finely crafted Canadian coins and sets? In addition to the Mint. ca Web site, view dozens of featured coins on the CoinNews.net page: Royal Canadian Mint Coins.]

The following coins are included in the Royal Canadian Mint 2010 Proof Set: