A new one-dollar circulation coin immortalizing the centennial of the Canadian Navy, proudly produced by the Royal Canadian Mint, was unveiled today by Her Majesty Queen Elizabeth II, Queen of Canada and Commander-in-Chief of the Canadian Forces. 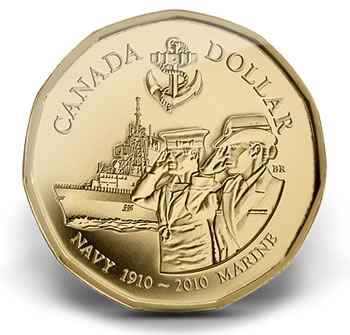 The unveiling took place at a luncheon celebrating the 100th anniversary of the Canadian Navy, hosted by the Honourable Peter MacKay, Minister of National Defence.

The Mint will produce seven million one-dollar Canadian Navy Centennial commemorative circulation coins, which will begin circulating today [June 29) and Canadians are encouraged to look for this special coin in their change, or order it online by visiting www.mint.ca/navy.

"The Mint recognizes the distinguished 100-year history of the Canadian Navy and is delighted to issue a commemorative circulation coin which honours the men and women who bravely served and continue to serve in Canada’s naval service," said Ian E. Bennett, the Mint’s President and CEO. "We are pleased that by collecting this coin, millions of Canadians will have a permanent reminder of their century of achievement."

"The Government of Canada is proud to join Canadians in saluting the men and women who have served in Canada’s Navy with loyalty and courage over the last 100 years," said the Honourable Rob Merrifield, Minister of State (Transport). "This commemorative circulation coin is an excellent way for Canadians from coast to coast to coast to preserve the memory of the Canadian Navy’s steadfast defence of Canada’s values and principles."

"The naval centennial commemorative circulation coins will create a public awareness of the role that the Canadian Navy has played over the past 100 years," said Vice-Admiral Dean McFadden, Chief of the Maritime Staff. "The coins are visible, practical reminders that the country is served, in both war and peace, by the men and women of the naval service who safeguard Canada and its values."

The reverse of this coin, designed by Nova Scotia artist Bonnie Ross, features a Halifax-class Frigate flanked by a 1910 naval serviceman and a contemporary female naval officer. An anchor at the top of the design symbolizes Canada’s naval service. Ms. Ross is an accomplished artist who has designed several Royal Canadian Mint collector coins, including the Three-Masted Ship and Brigantine coins from the 2005-2007 Fine Silver Tall Ships series.

In addition to releasing this commemorative circulation coin, the Mint is honouring the legacy of the first 100 years of the Canadian Navy with a selection of sterling silver coins featuring the famous corvette HMCS Sackville launched in January 2010. This includes:

These finely crafted collector coins are available by calling 1-800-267-1871, online at www.mint.ca/navy, or by visiting the Mint’s boutiques in Ottawa and Winnipeg. The coins are also available through the Mint’s world wide dealer and distributor network.