Ottawa, Ontario — The Royal Canadian Mint today released its first new collector coins and gift products of 2010, choosing the distinguished celebration of the Canadian Navy’s centennial as the theme of its 2010 Silver Dollar. 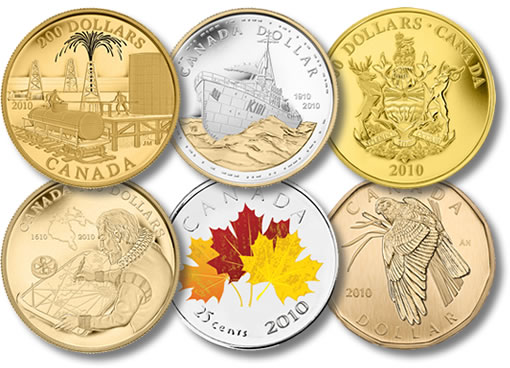 This flagship of the Mint’s annual collector coin program is joined by the newest editions of annual releases consisting of $100, $200 and $300 face value gold issues, as well as proof, uncirculated and specimen coin sets featuring popular icons of Canada.  Attractive gift sets and new greeting card coins complete the line-up.

"In 2010, Mint employees are honoured to pay tribute to the distinguished celebration of the centennial of Canada’s Navy while celebrating many other uniquely Canadian symbols through an inspiring array of world-class collector coins".

Below are the featured products being launched today.

Canada’s emergence as a modern nation took a leap forward when Canada’s Navy was founded through the adoption into law of the Naval Service Act on May 4, 1910 and the light cruiser HMCS Rainbow arrived at Esquimalt, British Columbia later that year to serve as the first unit of Canada’s new Navy. 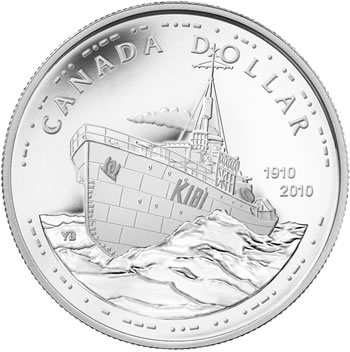 The Mint is proud to honour the centennial of the Canadian Navy on its 2010 Silver Dollar with the bold image of HMCS Sackville; one of 122 Flower Class Corvettes in operation by the end of World War II, when Canada boasted the third largest navy in the world. 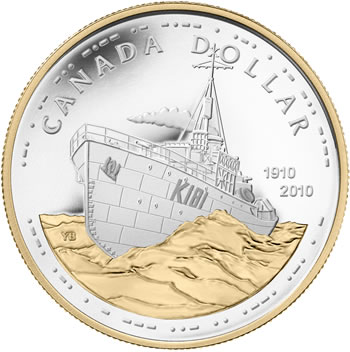 The same design is reproduced on a selectively gold-plated proof dollar coin, which is exclusive to the Mint’s 2010 Proof Set.  Only 55,000 sets, with a suggested retail price of $99.95 CDN, are available world-wide.

The Mint’s 2010 edition of the official $300 gold series of Coats of Arms of Canada’s provinces and territories celebrates British Columbia, home to the 2010 Winter Olympic and Paralympic Games. 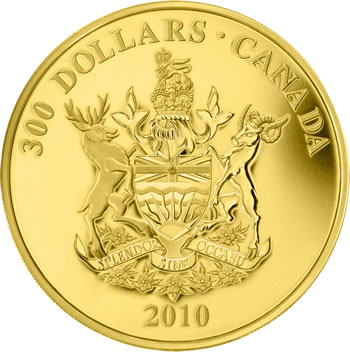 This imposing, oversize coin is a dazzling tribute to one of the world’s most scenic tourist destinations.

Marking the first time a sovereign entity other that the British Crown was granted permission to include Britain’s Royal Crest atop its coat of arms, the British Columbia Coat of Arms adorns the reverse of this proof 14-karat gold coin with a $300 face value.  Only 500 of these coins have been minted, each available at $1,949.95 CDN.

The Mint has chosen the petroleum and oil trade, a pillar of Canadian economic development since Canada’s first oil production in Oil Springs, Ontario in 1858, as the theme of the sixth issue from its Historical Commerce 22-karat gold coin series. 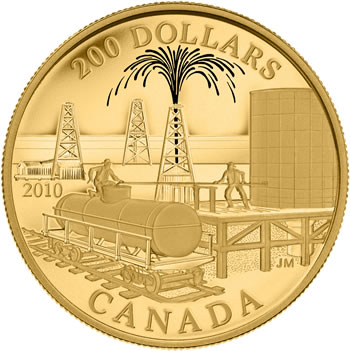 This new coin designed by Ontario artist John Mardon, which features a black laser-etched accent highlighting a gushing oil strike, is sure to catch the eye of collectors attracted to gold coins combining time-honoured craftsmanship and a touch of new technology.

The historical and natural landmark which has become the namesake of the oldest commercial corporation in North America discovered 400 years ago by explorer Henry Hudson is the subject of the Mint’s 2010 $100 gold coin. 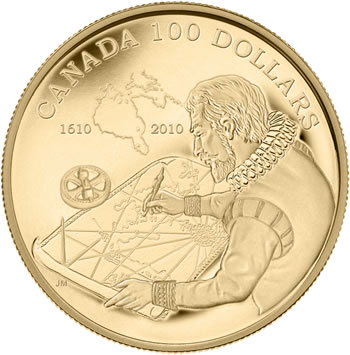 The reverse design created by Ontario artist John Mantha features Henry Hudson poring over his navigational charts in his attempt to chart a new course to the Spice Islands of the Pacific Ocean. The contours of of Hudson’s Bay; his eventual destination, looms overhead, framed by the dates 1610 and 2010. This coin is limited to a worldwide mintage of 5,000 and retails for $509.95 CDN.

The image of Canada’s only harrier hawk species, the Northern Harrier, adorns the reverse of the limited-edition aureate dollar coin featured in the 2010 Specimen Set. 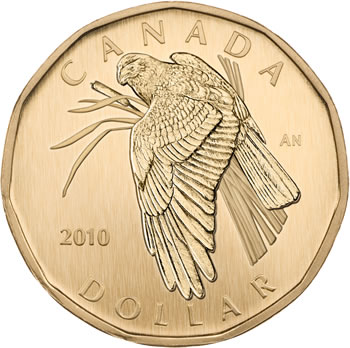 This is the only Mint coin set to include this limited-edition one-dollar coin gracefully designed by Ontario artist Arnold Nogy.

Also included are all of Canada’s traditional 2010 circulation coins (with the exception of the Common Loon $1 coin) in a unique specimen finish. The limited worldwide mintage for this set is 35,000, and it is available for $47.95 CDN. 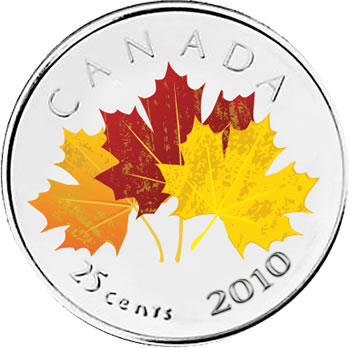 The unique 25-cent coins appear through a die-cut in the cover of the collection folder. Each set retails for $19.95 CDN.

The Royal Canadian Mint is also introducing its 2010 uncirculated set limited to a worldwide mintage of 55,000 sets, available for $23.95 CDN.

All of the Mint’s products are available directly from the Mint at 1-800-267-1871 in Canada, 1-800-268-6468 in the US, or on the Internet at www.mint.ca. The coins are also available at the Royal Canadian Mint’s boutiques in Ottawa and Winnipeg as well as through our global network of dealers and distributors.

The Mint is an Official Supporter of the Vancouver 2010 Olympic and Paralympic Winter Games and has undertaken to produce the most extensive circulation coin program in relation to the Olympic Games ever conceived by any mint worldwide, while also offering limited mintage collector coins and sets.  Visit www.mint.ca/2010 for Vancouver 2010 keepsakes and gifts.