DALLAS, TX — None other than the most famous American coin in existence, the "Olsen" Specimen of the 1913 Liberty nickel, is the anchor lot in Heritage Auctions Jan. 6-10, 2010 Florida United Numismatists (FUN) Auction, at the Orange County Convention Center.

"The past 10 years have brought tremendous growth for Heritage," said Greg Rohan, President of Heritage Auction Galleries. "Now, we’re thrilled to present the first great numismatic event of the new decade. As the official auctioneers for the two yearly FUN conventions, Heritage is committed to offering the best coins and related items. We’ve brought together the finest selections from more than 370 consignors to make this U.S. Coins auction a truly special event."

Without a doubt, the first among equals in the FUN auction is the 1913 Liberty nickel, PR64 NGC, CAC.

"The 1913-dated Liberty nickels are among the greatest mysteries of American coinage," said Rohan. "James Earle Fraser’s famous ‘Buffalo nickel’ design should have appeared on every coin dated 1913. Yet there are five 1913 nickels that have the old Liberty design instead."

Of the five Liberty nickels, two are in museum collections, leaving just three available to collectors. In the past decade auction appearances of 1913 Liberty nickels have been rarer than the coins themselves. Like the other 1913 Liberty nickels, the example offered by Heritage has become individually famous. It is known as the "Olsen specimen" after an early owner, but his is hardly the only notable name in its provenance.

Colonel E.H.R. Green, son of Hetty Green ("The Witch of Wall Street"), owned all five 1913 Liberty nickels, as did the numismatist-scholar Eric P. Newman. King Farouk of Egypt held the Olsen specimen for several years in the 1940s, and from the late 1970s to the mid-1980s, it belonged to Dr. Jerry Buss, owner of the Los Angeles Lakers.

A coin such as the Olsen specimen is often in the limelight, and this was never truer than in 1972 and 1973, when it sold for a record-setting price and became part of TV history.

"In 1972, World Wide Coin Investments paid $100,000 for this 1913 Liberty nickel, the first time a collectible U.S. coin was bought for a six-figure sum," said Rohan. "The newsmaking nickel went on-location to film scenes for an episode of the famous police drama Hawaii Five-O."

Millions of viewers were watching on Dec. 11, 1973, as a thief and the police sought the precious coin. In the space of an hour, the Olsen specimen became the single most famous coin in the world.

"The title of that episode was ‘The $100,000 Nickel’," Rohan noted. "Times have changed. Today, the Olsen specimen is valued in the millions of dollars."

One of the most popular and important coins in the Heritage Auctions FUN event will certainly be a 1927-D Saint-Gaudens double eagle, MS66 PCGS, from the Ralph P. Muller Collection, one of the most important, not to mention highest graded, surviving examples of these great American coins. 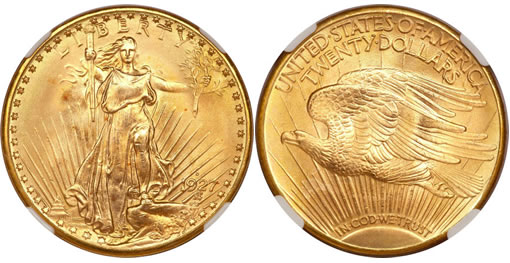 Though 180,000 of the coins were struck, only a handful remain today; just a few pieces ever left the mint, and the rest were melted down during the presidency of Franklin Delano Roosevelt.

"One of the first things collectors of Saint-Gaudens double eagles will learn is that the mintages for later dates are basically meaningless," said Rohan. "The real question is not how many were made, but how many survived. In the case of the 1927-D, our research has identified only 13 distinct examples."

The few surviving 1927-D double eagles went to private and museum collections rather than into circulation, and high grades are the norm. The Muller specimen, with a certified grade of MS66, is tied for the second finest known.

"With the quality of the coins in the Ralph P. Muller collection, we expect strong bidding interest, especially on the 1927-D," said Rohan. "That coin should pass the million-dollar mark without hesitation."

While it doesn’t approach the 1913 Liberty nickel or the 1927-D double eagle in terms of price, an important Lincoln cent dated 1943, AU58 PCGS, struck in bronze when it should have been made out of steel, is sure to be the subject of much discussion and debate among top collectors. It has been in a private collection for more than 50 years; the January event will be the first time it appears at public auction.

"This 1943 bronze cent, long held privately, is new to the wider world of coin collectors," said Rohan. "Bidders have the opportunity to become the first person outside the family to own it."

In 1943, for one year only during World War II, the government made cent coins out of zinc-coated steel instead of bronze, an attempt to save copper for the war effort. Mysteriously, a few 1943-dated cents were made in the old bronze alloy. These odd cents quickly caught the fancy of coin collectors and gained wider fame. In the past, stories about the 1943 bronze cent, sometimes referred to in the past as a "1943 copper penny," have sent millions of people on a hunt through their pocket change, looking for a windfall. Despite all the searching, fewer than 20 genuine 1943 bronze cents are known today.

"One of the oldest tales about the 1943 bronze cent involves Henry Ford, the automotive titan, who supposedly offered a new car in exchange for one," said Rohan. "It wasn’t true, but our consignor could easily go out and buy a new car after the auction is done! This coin has a chance to reach six figures."

Pattern collectors will find a wide range of pieces in the auction, but none are as important as the 1874 Bickford $10 Pattern in Gold, Judd-1373, PR 65 Deep Cameo PCGS, one of only two known Judd-1373 specimens graded PR65 by PCGS. In addition to the legendary Judd-1373 Bickford pattern, the auction contains two examples of the famous 1879 Flowing Hair Stella in gold, Judd-1635. Of the two, the finer coin is an incredible PR67 Cameo specimen graded by NGC.

"As one of the few patterns to be collected as part of the mainstream of U.S. numismatics, the 1879 Flowing Hair gold Stellas face insatiable demand," said Rohan. "This remarkable coin, one of the finest certified, has also been awarded the Star designation by NGC for exceptional eye appeal. It’s truly a coin that must be seen to be believed."

Heritage has a longstanding tradition of offering special collections during FUN, and this year is no exception. The Boca Collection, Part I is a remarkable offering of proof sets from 1856 through 1953, with most years containing proof denominations from the smallest copper coin to the hefty silver dollar. The 1890 proof set in the Boca Collection offers an unusual and important exception: the set also contains the proof gold coins of the same year. Each year will be sold as a single lot.

The Old West allure of the Carson City Mint has fascinated generations of collectors, and while other issues may be rarer, the 1870-CC double eagle is the most famous of all. It is also a highly challenging issue in its own right, and, in an extraordinary coincidence, Heritage is offering two examples in the auction.

"The Carson City Mint struck its first coins in 1870, and the double eagle, or $20 gold coin, was the largest denomination ever made there," said Rohan. "Add in a mintage that was historically low, and that’s a formula for high rarity and even higher prices."

Whenever an 1870-CC double eagle comes to auction, it’s inevitably a highlight. To have two pieces – one graded XF40 by NGC, the other XF45 by PCGS – is a testament to Heritage’s global reach; the XF45 example is new to the world of U.S. collecting, having spent decades in relative obscurity in Germany.

Sure to be among the great highlights of the Heritage FUN auction are three mammoth gold bars recovered from the wreck of the S.S. Central America, each weighing more than 100 troy ounces. They are, without a doubt, among the most impressive lots in the Platinum Night session.

"Gold bars like these were created by assayers in California and then shipped through water or water-land routes back to New York, where they were melted in the course of business," said Rohan. "When the S.S. Central America, one of the many transport ships to ferry gold and passengers from Panama to the United States, sank in the aftermath of a hurricane in 1857, the hundreds of gold bars in its cargo went down with it. Well over a century passed before the Central America’s rediscovery and salvage."

The largest bar was created by assayer Justh & Hunter and was stamped with a weight of 185.21 ounces and 876 fineness, out of 1000 parts. The other two ingots were made by Kellogg & Humbert. The smaller of those two rings in at 102.17 ounces and an impressive 903 fineness, while the larger ingot weighs 109.55 ounces and is stamped with 895 fineness.

"A quarter of a century ago, virtually no territorial gold bars were known outside of museum collections, and the few bars known were almost all of small size," noted Rohan. "The treasure of the S.S. Central America created an entirely new field of study and collecting when these long-lost bars were re-introduced to the world. The FUN auction offers bidders the chance to own a piece of this priceless California Gold Rush treasure."