Coin traveled in the family of Charles Bienvenu, New Orleans Mint Superintendent in 1856 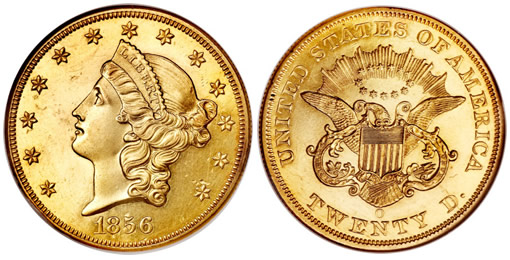 "Many specialists believe that this is the single most important New Orleans double eagle in existence," said Greg Rohan, President of Heritage, "and one of the most important O-mint coins of any denomination. With its sharp strike and reflective luster, this coin is clearly something special, and it has been recognized as a specimen striking by experts and the major grading services, first by NGC and now by PCGS."

The 1856-O is a tremendous rarity among Liberty double eagles, an issue whose fame transcends its series. Just 2,250 pieces were struck, and the mintage has a survival rate of less than 2% regardless of grade. Ownership of any 1856-O double eagle is a great numismatic honor, but of all the known pieces, this one, the only example known without any trace of wear, stands out from the rest.

Marc Emory, who was the original purchaser of the coin for New England Rare Coins, and who is now a member of the Heritage numismatic team, offered this recollection of its remarkable rediscovery:

"New England Rare Coin Galleries was contacted by a family, then living in Vermont," Emory said. "They inquired if we would be interested in purchasing a proof 1856-O double eagle. New England staff explained that no proofs were known of this issue.

The party on the other end of the line patiently explained that, well, they had one, nonetheless. The New England staffer then asked rhetorically — or so he thought — if the prospective seller was a descendent of Charles Bienvenu, the superintendent of the New Orleans Mint in the year 1856. All sarcasm was quickly forgotten when the seller on the phone responded, ‘Yes.’"

After more than a century spent with Charles Bienvenu and later generations of his family, this 1856-O double eagle has subsequently made several auction appearances, including the June 2004 Long Beach auction. The coin is expected to top $1,000,000.

Another coin that has attained legendary status over the centuries, a 1794 Dollar, NCS XF Details, will hold down the second spot on the podium in Long Beach.

The 1794 dollar, the first silver dollar struck under the Mint Act of 1792, has attained legendary status among U.S. coins, and few issues can rival it for historicity and pride of ownership. Only 1,758 of the coins were paid out, most of which are lost forever. This example retains much of its original detail and is well-placed on the census of known survivors.

An 1836 Name Below Base, Judd-63 Restrike Gobrecht Dollar, PR62 PCGS, is garnering close attention from interested bidders as the auction draws closer. This coin is an extremely rare re-strike that combines the Name Below Base, Starless obverse dated 1836 with the Starless reverse of 1838. It is one of just three such pieces known, and this specimen has been unavailable to collectors for decades. It has a pedigree including famous names such as Virgil Brand and King Farouk of Egypt. It comes to Heritage from The Frank M. Stirling Collection.

A 1942 Lincoln Cent in Aluminum, Judd-2079, PR66 PCGS, is the most high profile cent in the Heritage auction in Long Beach. This particular cent is one of several World War II-era Mint experiments to determine a suitable replacement metal for bronze in cent coinage. This aluminum cent weighs about half as much as a bronze cent but is nearly twice as thick, making the final judgment on it as a replacement for the bronze cent as dubious at best. The 1942 Lincoln cent in aluminum is one of the most fascinating patterns of the mid-20th century to appear on the market in recent years.

Further highlights of the Long Beach Auction include, but are not limited to:

The C-1 is a very rare die pair with approximately 20 pieces known in all grades. This specimen has been off the market since the 1930s. From The Collection of a Dallas Gentleman.

A Gem representative of the lowest-mintage New Orleans Barber dime. From The Mark Miller Registry Set of Barber Dimes.

Tied for the finest certified example of this extremely rare pattern, a recently rediscovered specimen. From The Frank M. Stirling Collection.

The single finest Ultra Cameo specimen from this proof issue of just 76 pieces. From The Frank M. Stirling Collection.

This near-Mint piece is among the finest survivors from the only double eagle issue struck at New Orleans after the end of the Civil War.

To see the full catalog of this auction, read detailed descriptions of each lot and to download fully enlargeable, hi-res color images, go online to www.HA.com/LongBeach.