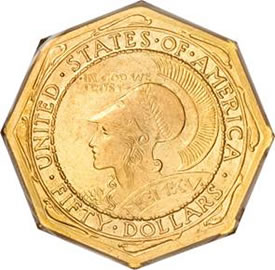 DALLAS, TX — One thing was clearly on the minds of collectors at the $9.4 million+ Heritage Auctions Houston U.S. Coin Auction on Dec. 6, and that was gold. More than 3,600 bidders participated in the event, which sold through fully 93% of the lots offered, or 87% by dollar value.

"We expected gold to perform well at this auction," said Greg Rohan, President of Heritage Auctions, "especially with the spot price of gold at $1200. While gold did dominate the top lots of the Houston sale, it’s also encouraging to look at the overall results and see that the coin market is remaining steady."

The year 1915 seemed to be foremost in the minds of collectors in Houston, as two sculptural, splendid Panama-Pacific $50 gold pieces came in as the event’s top two lots. While the round Pan-Pac $50 commemoratives are the rarer examples in the absolute sense, the octagonal variety has always proved the more popular, as evidenced by the auction’s top price-getter, a gorgeous Near-Gem 1915-S Panama-Pacific $50 Octagonal MS64 PCGS, which led the way with a final price of $92,000. All prices include a 15% Buyer’s Premium.

If the Octagonal variety of the Pan-Pac $50 was the top prize in Houston, a superb round 1915-S $50 Panama-Pacific $50 MS64 NGC was close behind in terms of price with a highly respectable $86,250 finish. The $50 round has the distinctive status of having the lowest net distribution, at 483 coins, of any commemorative issue made in the United States.

A rarely offered 1867 Half Eagle, PR66 Cameo PCGS, Ex: Carter, occupied the third slot in the auction’s Top 10, with a $74,750 price realized. A mere 50 proof half eagles were minted in 1867, and scholars estimate that just 10 to 12 proofs still exist today, one of which is the present example. Not to be outdone, a highly desirable 1879-O $20 AU58 PCGS CAC brought the same $74,750 price tag and the same spirited level of bidding. The 1879-O Liberty double eagle was the only New Orleans issue of the denomination struck after the Civil War, greatly increasing its desirability, already significant due to its limited surviving population, a small fraction of the original mintage of 2,325 pieces.

A sublime Gem 1925-D Saint-Gaudens $20 MS65 PCGS, one of the finest examples known of this popular issue – considered a great rarity until the discovery of significant stashes in the 1950s and 1960s – proved the enduring popularity of the issue with  a $71,875 final price.

"Like so many issues in the series, the 1925-D has seen recent importations, mostly from banks in France and Switzerland, that have lessened its rarity while adding to the number of high-grade examples," said Rohan, "but that has neither diminished its popularity nor lessened the desire among high-end collectors for the top examples."

1850-O $20 MS60 PCGS: The 1850-O Liberty Head $20 is a first-date-of-issue coin, and the first branch mint double eagle. The reported mintage was a respectable 141,000 pieces, but virtually all these coins were released into circulation. Few examples were saved, and the surviving population is estimated at 500-600 examples in all grades, only 3-4 of which – including the present specimen – are in Mint State grades. Realized: $63,250.

1907 $20 High Relief, Wire Rim MS65 NGC, CAC: The magnificent Wire Rim Saint-Gaudens High Relief double eagles of 1907 are a prized feature of many collections because of their unique appearance and history. The present example is an especially attractive instance of this famous coin. Realized: $46,000.

1850 $20 MS63 NGC: The Philadelphia counterpart of the 1850-O $20 listed above, a conditionally rare representative from the first year the double eagle denomination was struck for circulation.  Realized: $43,125.

Heritage Auctions, headed by Steve Ivy, Jim Halperin and Greg Rohan, is the world’s third largest auction house, with annual sales more than $600 million, and 475,000+ registered online bidder members. For more information about Heritage Auctions, and to join and gain access to a complete record of prices realized, along with full-color, enlargeable photos of each lot, please visit www.HA.com.