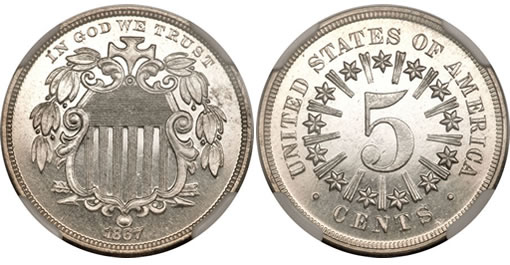 Demand for high quality numismatic gold rarities continued in Orlando, with seven of the top 10 lots being gold rarities. All prices include 15% Buyer’s Premium.

"We’re quite happy with the result of this auction," said Greg Rohan, President of Heritage Auctions. "It was a small auction by Heritage standards, but quite focused, and collectors responded. The result was a very successful auction."

More than 3700 bidders competed for the offerings, which saw a 94% sell-through rate by total lots.

The 1867 Rays Gem Cameo Proof Shield Nickel is a coin well known to specialists and advanced numismatists and the competition for this specimen was indeed heated before landing in the collection of a smart buyer. Though there may be more 1867 Rays proofs known than originally thought, many are known to be later restrikes, while this piece bears every hallmark of being one of the few – likely 10-15 total – true originals struck.

One of the most hotly contested non-gold lots of the top 10 was a magnificent 1865 25C, Briggs 1-A MS66 PCGS, CAC, an exceptional example from the concluding year of the Civil War, and an important opportunity for the Seated specialist, one of whom added the coin to their collection for a price realized of $48,875.

A remarkable 1907 $20 High Relief, Flat Rim MS65 PCGS, was close on the heels of the 1865 25C, with a price realized of $46,000. This coin was a result of the numismatically inclined President Theodore Roosevelt, who wanted to create coins for the United States that would rival the beauty of those struck by the ancient Greeks. The result was the 1907 High Relief double eagle, considered by many to be the crowning achievement of Roosevelt’s coinage renaissance.