US Mint 2009 American Eagle Silver Bullion Coins have enjoyed scorching sales this year, easily surpassing the prior 2008 all-time annual record. And that was accomplished back in early October. The one ounce, .999 fine silver coins have now topped a new milestone with more than 27 million sold. 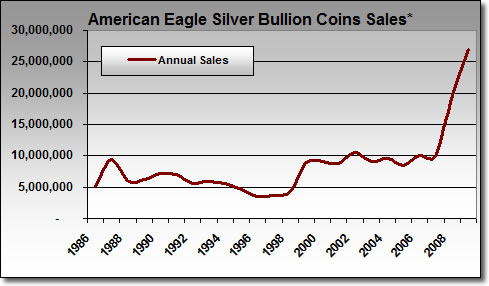 The bullion coins were suspended in late November due to a depleted inventory. With a week of sales lost, November still ranked as the fourth best in 2009, and the best November ever dating back to the series launch in 1986. As proof of the pent up demand, the US Mint sold 1,012,500 silver eagles in a single day when sales resumed in an allocated basis on Monday.

Best ever months are the norm this year, with nine of them now recorded. January and September trailed, coming in second after the same record breaking months in 2008.

The fierce demand has resulted in a shortage of silver coin blanks, which precipitated the first ever collector proof eagle cancellations.

The following table shows how eagles have been doing in 2009:

The Mint does not sell bullion coins directly to the public, but to a network of Authorized Purchasers for a small amount over the current spot price of silver. These purchasers then resell them to coin dealers, precious metal providers, or to the public directly.