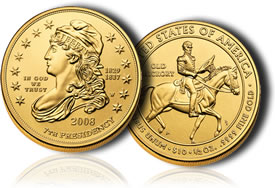 Sarah Polk First Spouse Gold Coins launch Thursday morning at 12:00 noon ET. Before then, expect the uncirculated Jackson’s Liberty First Spouse Gold Coin to go off sale. Why? US Mint practice with the gold series has been to discontinue the oldest offering immediately before launching the newest issue.

While that likelihood is exceptionally strong, it is not a 100% certainty. Take for example the Jackson’s Liberty proof sell out in mid August. The proof coin did not reach its maximum mintage, yet the Mint placed it in their "sold out" category weeks prior to the upcoming Sarah Polk coin debut. Mint practice can be fluid.

In a side note, the unexpected move proved to be a shot in the arm for the remaining coin. Uncirculated Jackson’s Liberty sales spiked the following week, rising 261 compared to the previous 34. These are not exactly blazing sales figures for US Mint coins. But they are rather impressive for the First Spouse Gold Coins series where many mintage figures will likely be considered scarce years from now.

While available, the uncirculated coin may be ordered through the US Mint page: