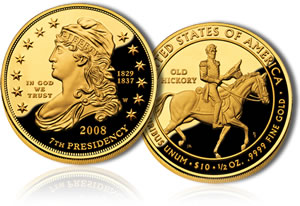 The US Mint has added Jackson’s Liberty First Spouse Gold Proof Coin to its sold out list, in a move that will shock collectors of the $10, one-half ounce 24-karat gold coin series.

The US Mint’s most recent price for the proof coin was $629.00. Collectors who wish to buy any now will need to turn their attention to the secondary market, and those options are somewhat limited. As an example, current eBay listings

Jackson’s Liberty First Spouse Gold Coin reverse features an image of a mounted Jackson as he led his troops to victory over the British at the Battle of New Orleans. It was designed by Justin Kunz and sculpted by Don Everhart.

The .9999 fine gold proof features a rendition Lady Liberty as it appeared on the Capped Bust, Lettered Edge Half-Dollar minted during Andrew Jackson’s presidency, and was used since his wife died before he took office.

As of this writing, the uncirculated option is still available for $616.

This is disapointing news. I’ve been watching the weekly mintage changes and I was planning on buying one until the end of the month. I wish the United States Mint would provide final sales dates for its products.