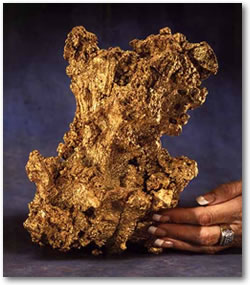 One of the largest gold nuggets ever discovered has gone on display at The Perth Mint.

Newmont Mining Corporation’s Normandy Nugget, which was found in a dry stream bed near Kalgoorlie, Western Australia in 1995, can now be seen up close in the Mint’s fascinating Gold Exhibition.

Weighing in at 25.5 kilograms, it is the second largest nugget in the world today having escaped being melted down, and is the 26th largest gold nugget ever discovered.

Information published by the University of Southern California, where the 40 million year-old nugget was examined in 1999, showed it to be 80 to 90% high purity gold.

That gives the nugget an intrinsic value of approximately AU$800,000 at today’s gold price, but its uniqueness and historical significance means it would doubtless fetch much more.

Perth Mint Chief Executive Officer Ed Harbuz said the Mint was delighted to be able to put Newmont’s Normandy Nugget on display. "It is a coup for the 100,000- plus people who visit our Gold Exhibition annually to be able to see this important cultural and heritage asset symbolising almost 160 years of gold discoveries in Australia," he said.

Normandy Mining, now part of Newmont Australia, purchased the nugget in 2000 after the Commonwealth Government objected to attempts by its finder to sell the culturally significant object overseas. It was brought home with the aim of ensuring it remained in Australia for all to see and admire.

Since then, it has been displayed at museums around the world including Denver and Tokyo before Newmont agreed to a long-term loan to the historic Perth Mint.

Newmont Mining Corporation (www.newmont.com) was founded in 1921 and is headquartered in Denver, Colorado. It has operations in the United States, Australia, Peru, Indonesia and Ghana, and in 2007, it became the first gold company selected to be part of the Dow Jones Sustainability World Index.

In Australia, Newmont owns the Tanami gold mine in the Northern Territory, the Boddington and Jundee gold mines in Western Australia, and is also a joint owner of the Super Pit in Kalgoorlie.