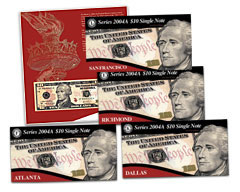 The final installment of the "We the People" Series 2004A $10 Single Note Collection is now available from the Bureau of Engraving and Printing (BEP).

$10 notes representative of the Federal Reserve Districts of San Francisco, Richmond, Atlanta, and Dallas are available for $35 per note.

The entire collection includes 12 notes that are issued individually in three installments a year. The First Series 2004A $10 Single Notes were released in January, with singles representative of the Federal Reserve Districts of Boston, New York, Chicago and St. Louis. The second $10 note installment was issued in April with banknotes for Philadelphia, Cleveland, Minneapolis, and Kansas City.

The BEP offers the entire collection through a subscription program for the price of $359.40, a savings of $60.60 off the cost of purchasing each of the twelve Federal Reserve banknotes separately.

The collection may be purchased through the BEP store at http://www.moneyfactory.gov/.