(Irvine, California) — A wide selection of rare ancient and world coins will be offered in Bowers and Merena’s Official Auction of the American Numismatic Association World’s Fair of Money® at the Los Angeles Convention Center and online, August 2-8, 2009. Ponterio & Associates, Inc., a division of Bowers and Merena, will present the world sessions on Saturday, August 8.

"This is a beautiful specimen," said Richard Ponterio, executive vice president of Bowers and Merena.

"This Manen oban is the only type that was produced using machinery. Prior to this type obans were hand made. The use of obans halted shortly after the time of Commandore Perry forcing Japan to open its trade with the west in the mid 1800s." (www.BowersandMerena.com). 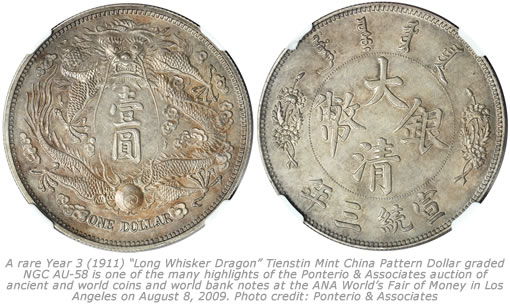 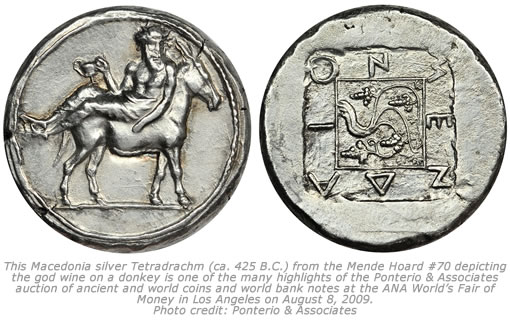 It has a well struck reverse and nice metal quality with full border on the obverse. It depicts Dionysos ‘Bacchus’ the god of wine and grapes holding a cup of wine while reclining on a donkey," explained Ponterio.

Among the many other highlights of the auction are:

The auction also will include U.S. coins and U.S. and world bank notes.

Ponterio & Associates, Inc. was founded in 1982 by renowned specialist in world and ancient numismatics, Richard Ponterio. The company was acquired by Bowers and Merena Auctions in 2008, creating an auction powerhouse that covers the collecting interests of U.S. and international coin and currency enthusiasts. Annual Ponterio auctions include the Official Auction of the Chicago International Coin Fair and the New York International Numismatic Convention.

The ANA World’s Fair of Money, August 5-9 in the Los Angeles Convention Center Hall A, features more than 1,000 dealers, a Museum Showcase with a special exhibit of national treasures from the Smithsonian Institution, mints from around the world and a variety of educational programs and family activities. For more information, visit www.WorldsFairofMoney.com.