(Irvine, California) — More than 500 U.S. and world bank notes will be offered in the Official Auction of the American Numismatic Association World’s Fair of Money® conducted by Bowers and Merena Auctions at the Los Angeles Convention Center and online, August 2 – 8, 2009. 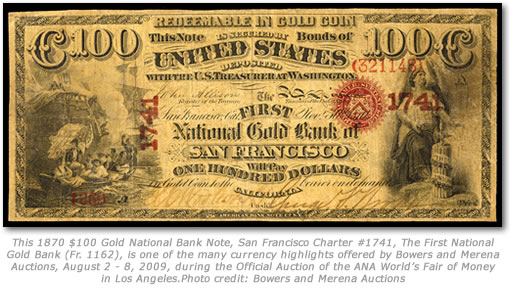 "This classic rarity is one of only eight notes of this type in private hands, and one of three of this Friedberg number.  Those others are in strong hands and not likely to become available in the foreseeable future.

In fact, only three examples have been offered for public sale in the last decade and the latest example, nearly identical to this one, sold for $258,700 in 2007," said Steve Deeds, President of Bowers and Merena (www.BowersandMerena.com).

"With collectors holding tightly to the others, we’re not sure when there will be another opportunity to acquire such a rare and elusive note." 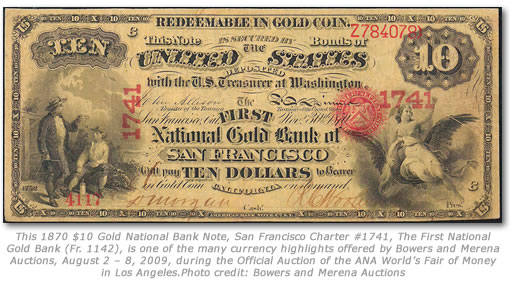 Other U.S. currency highlights in the auction include: 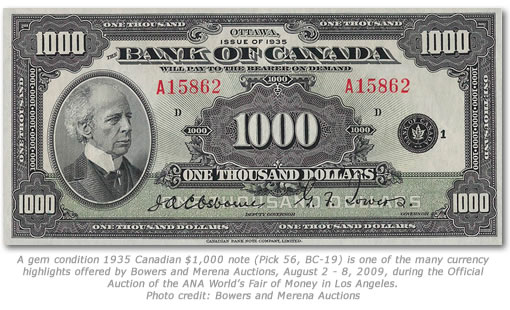 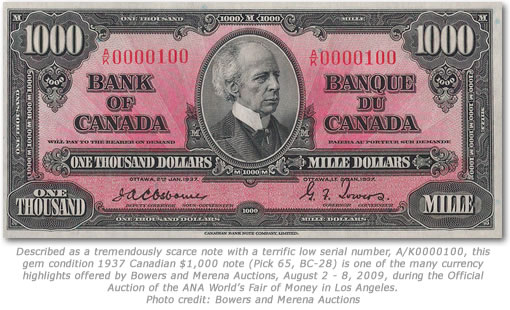 "The 1937 $1,000 is a tremendously scarce note with a terrific low serial number of A/K0000100.  This example shows nice original paper along with stunning color which illuminates the design.  The reverse allegorical scene is breathtaking showing a woman with a sword and sheltering a young child," said Rick Ponterio, Executive Vice President of Bowers and Merena.

Other world currency highlights include:

The auction also will include U.S. and world coins.

Ponterio & Associates, Inc. was founded in 1982 by renowned specialist in world and ancient numismatics, Richard Ponterio.  The company was acquired by Bowers and Merena Auctions in 2008, creating an auction powerhouse that covers the collecting interests of U.S. and international coin and currency enthusiasts.  Annual Ponterio auctions include the Official Auction of the Chicago International Coin Fair and the New York International Numismatic Convention.

The ANA World’s Fair of Money, August 5 – 9 in the Los Angeles Convention Center Hall A, features more than 1,000 dealers, a Museum Showcase with a special exhibit of national treasures from the Smithsonian Institution, mints from around the world and a variety of educational programs and family activities.   For more information, visit www.WorldsFairofMoney.com.

it is rather valuable and outstanding

what can i get for this at the auction???

i am from south africa