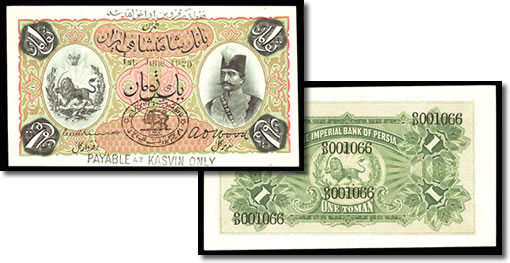 This stunning Iranian Choice Uncirculated 1 Toman note dated 1.6.1920 and attributed as P-1b is just one of the more than 825 lots in the June Baltimore Auction of World and Ancient Coins and Paper Money. (Click image to enlarge)

The two-session sale will be conducted June 18 and 19 at the Baltimore Convention Center. More than 2,300 lots will be offered, including approximately 1,500 lots of Ancient and foreign coins and more than 825 lots of world paper money.

"We have received a wide array of important world paper money consignments for this sale," stated Bowers and Merena’s director of currency auctions, Matthew Quinn.

"A splendid selection of Iranian notes from the 1920s and 1930s figure prominently among the highlights in this auction, and they include a stunning Choice Uncirculated 1 Toman note dated 1.6.1920 and attributed as P-1b.

Also of note is a China, Republic, 5 Yuan dated 4.10.1914 and attributed as P-34. The note grades Very Fine and is significant because examples of this type are usually seen only in remainder form without signatures and perforated ‘canceled,’ which is a fate this note escaped.

We anticipate strong bidder competition for these and other important world paper money lots in this sale."

All lot descriptions and images in the June 2010 Baltimore Auction can be viewed online at the Bowers and Merena website, www.bowersandmerena.com. Printed catalogs are available upon request by calling 800.458.4646.

Online bidding will commence in mid-May and pre-auction bids will be accepted at www.bowersandmerena.com; by e-mail at auction@bowersandmerena.com; by phone at 800.458.4646; by fax at 949.253.4091; and by postal mail addressed to Bowers and Merena, Baltimore June 2010, 18061 Fitch, Irvine, CA, 92614. Interested bidders are also encouraged to view lots onsite in Baltimore in June and bid in-person at the live auction, or live online through the Bowers and Merena website.

A complete auction and lot viewing schedule is available at www.bowersandmerena.com or by calling 800.458.4646.

Ponterio & Associates, Inc., was founded in 1982 by Richard Ponterio, renowned specialist in world and ancient numismatics. The company was acquired by Bowers and Merena Auctions in 2008, creating an auction powerhouse that covers the collecting interests of U.S. and international coin and paper currency enthusiasts.

They continue to serve as Official Auctioneer of the Whitman Coin & Collectibles Baltimore Expo three times every year. Bowers and Merena has handled four of the five most valuable United States coin collections ever sold, including the Louis E. Eliasberg Sr. Collection, the Harry W. Bass Jr. Collection, the Garrett Collection for The Johns Hopkins University, and the Norweb Collection. Bowers and Merena Rare Coin Galleries offers direct buying and selling of exceptional quality gold and silver rare coins.

For more information about Ponterio & Associates’ Baltimore Auction of World and Ancient Coins and Paper Money, call 800.458.4646. For media inquiries regarding world paper money offerings, ask for director of currency auctions, Matthew Quinn. Complete prices realized for all past auctions are available at www.bowersandmerena.com.