DALLAS, TX – Until three years ago, no one even knew that the 1770 Nuevo Reino Pillar Dollar existed. That changed quickly, however, when an amazing stash of 14 coins was found during the bulldozing of a parking lot in Bogota that was being razed for a new building. 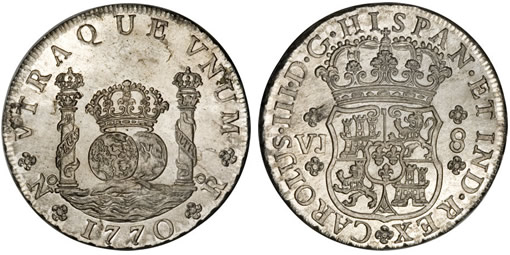 Buried beneath the dirt and the decades was the old foundations of the Nuestra Senora del Pilar church. The church, which existed from 1770 until 1948 when it was set ablaze during riots, was also a convent and school for girls. The church was eventually torn down and the area turned into a parking lot. When construction began on a new building three years ago and crews started digging, a small group of coins turned up – including the 14 1770 Nuevo Reino Pillars.

Now, of the two that aren’t already in private hands, or held by private institutions, the most pristine will be a featured lot in Heritage’s May 31 Long Beach World Coin Auction. It is estimated at $60,000-$80,000. It is officially listed as a Carlos III Pillar 8 Reales 1770NR-VJ, KM39 (Date Unlisted), Calico 1000, Cayon Unlisted, MS64 NGC.

Few world crowns demand as much numismatic interest as the Columnarios, or Pillar Dollars, that were struck from 1732 to 1773 in numerous Spanish mint houses throughout the Americas. By the second half of the 18th century, the Pillar Dollar had truly become "world currency," finding wide use both in Europe, the United States (where it was legal tender) and the Far East. Both old and new worlds are depicted on the coin’s obverse and are crowned between the two pillars of Hercules with legends "VTRAQUE VNUM" (both are one). On the reverse, the arms of Castille and Leon are displayed under the Spanish crown with the denomination "8" to the right, assayer initials to the left.

Of all the Pillar Dollars minted, the pieces struck in Santa Fe de Bogota, Nueva Granada (today Colombia) at the Nuevo Reino mint are perhaps the most desired among collectors and numismatists worldwide. This is one such coin. They were only struck in 1759, 1762 and 1770 – all are extremely rare with very few specimens known.

Spanish tradition says that when the first foundation stone is laid it is blessed and, in specific cases, the stone is carved and coins are placed inside. Inside this particular Bogota stone were more than 100 coins, mostly cob 2 Reales, a few gold cobs, and numerous circulated Pillars from Mexico. Since there are no previous records of 1770 Nuevo Reino Pillars, it is likely that these pieces were struck specifically for the ceremonies at the Nuestra Senora del Pilar Church.

All of the coins found have been sold to private collectors and museums in Colombia and Spain. The original purchaser of the coins kept the two highest quality coins for himself, and the piece Heritage is presenting is one of those two. With an incredibly strong and sharp strike, most – if not all – of the original luster is remaining.

For more information on this lot, to view the other lots in the Long Beach auction and to read detailed descriptions and download fully enlargeable, hi-res images, follow this link.

I found a coin with the following description;
VTRAQUE VNUM 1762,2 pillars inside of them is 2 globes with a crown
on top.The other side I can’t see too good.At the top is a larger
crown,around the side IS REX.I can see 2 MM,8.
How much does this worth?