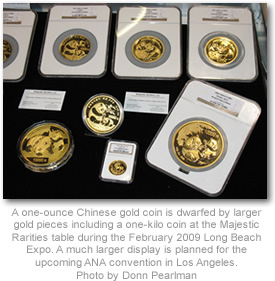 The largest public array ever assembled in the United States of huge, modern, certified Chinese gold coins, ranging in size from five ounces to one kilo (32.15 ounces) each, will be displayed at the American Numismatic Association’s World’s Fair of Money® convention in Los Angeles, August 5 – 9, 2009.

The presentation comes with an education lesson from the exhibitor, Nicholas Brown of Majestic Rarities in Chicago: "Protect your coins. Protect yourself!"

"There will be over 300 ounces of large, low-mintage gold.It will be the most amazing display of modern Chinese coins ever seen in the United States," said Brown.

Many of the rare coins in the planned display at the ANA convention (at combined booths 331 and 430) have a low mintage of only 200 each or less. 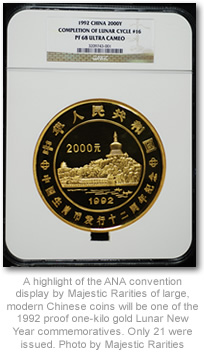 A highlight of the display will be the 1992 proof gold and silver one-kilo Lunar New Year commemorative coins. Only 21 of the gold were issued, just 185 of the silver. Both kilo coins depict all 12 animals of the Lunar New Year cycle, 1981 to 1992. Both are graded NGC PF-68 Ultra Cameo.

Accompanying these two salad plate-sized coins will be examples of 12, eight-gram Chinese Lunar gold coins issued in the first series from 1981 through 1992 as depicted on the companion one-kilo pieces.

Each of these coins is graded NGC PF-69 Ultra Cameo. This will be the first time a certified set of the 1981 to 1992 Lunar gold and silver coins has ever been publicly displayed in the United States, according to Brown.

"I want people to be able to see coins they otherwise might never see in person," said Brown who specializes in modern Chinese coins, 1979 to date. He has also become a determined crusader about the proper care of coins.

He cringes when he sees the results of mishandled or poorly housed coins, such as previously pristine treasures that now have detracting hairline scratches from being jostled in flimsy holders or smears from prolonged storage in chemically unstable plastic. 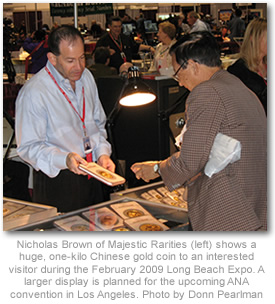 He urges collectors to "Protect your coins. Protect yourself!," spreading the word to have coins authenticated, graded and encapsulated by Numismatic Guaranty Corporation, which offers holders up to kilo-size, or certified by Professional Coin Grading Service.

"For many years, the original packaging of China Mint coins sold to collectors did not offer adequate protection. I’ve seen one-ounce Pandas bouncing inside their original capsules when even slightly moved.

That is why there are so many modern Chinese coins that grade so low. People could easily take them from their capsules to frequently look at and handle the coins.

Sometimes they were wiped or even dropped. To avoid this, put them in a real holder.Get them authenticated, graded and encapsulated," he cautions.

"There are so many counterfeit coins or coins with problems that I can’t understand how or why anyone would purchase a ‘raw’ coin."

Nick Brown began collecting coins at the age of 12 and was attracted to modern, low mintage Chinese coins in 2004.

The "Panda-monium" over modern Chinese gold coins began in 1982 with the first in a continuing series of gold bullion coins from the Peoples Republic of China with popular designs featuring a lovable Giant Panda that’s native to Western and Southwestern China. Silver Panda bullion coins were introduced in 1983 and platinum in 1987.

To help educate collectors and dealers, the display at the ANA convention will also have several counterfeit Chinese coins. Brown purchases these to deliberately remove them from the marketplace and to use as part of the educational portion of his exhibit. That way he can show and tell why a coin is counterfeit by comparing the fake to a real coin.

"It is important to educate everyone. I have seen too many people purchase poor quality or counterfeits thinking they got a deal. A great deal is being able to purchase a truly rare coin that is problem-free of major distractions at a reasonable price," he said.

The World’s Fair of Money show is hosted by the nonprofit American Numismatic Association. The association will display an informative exhibit from the ANA Money Museum about the history of Chinese money. This educational display shows that early money in China had unusual shapes and forms, often consisting of pearls, jade, gold, ivory shells and even knives.

Public hours of the World’s Fair of Money (www.WorldsFairofMoney.com) are Wednesday through Saturday, August 5 – 9, from 10 a.m. to 6:30 p.m. General admission is $6. Children 12 and under are admitted free.