The Perth Mint has released a stunning commemorative coin to celebrate the 200th anniversary of postal services in Australia. The release remembers the historic appointment of Isaac Nichols, as a prisoner who became a prominent land owner then public servant when he was appointed as the first Postmaster of New South Wales in March 1809. 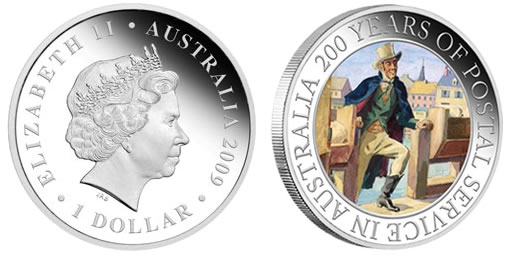 A former convict who had impressed authorities with his dillegence and sobriety, Nichols introduced the secure and orderly distribution of mail brought to the isolated colony by ship.

Prior to his appointment, news hungry residents of Sydney Town rushed to the foreshore, where, in the chaotic scramble for letters and parcels, items were either lost or damaged, while unscrupulous people took advantage of the mayhem to obtain mail fraudulently.

Nichols collected correspondence and packages from vessels in Sydney Cove, advertising the names of recipients who could collect their mail from his home – Australia’s first Post Office – situated near the waterfront in Lower George Street.

Perth Mint Sales and Marketing Director, Ron Currie, says it is important to recognise the valid contribution that Australia Post has made to this country.

"Australia Post has played a vital role in connecting Australians with each other and the rest of the world and has helped shape Australia into the great nation it is today."

"When Sir John Forrest, the first premier of Western Australia, wrote a letter asking permission to build a branch of The Royal Mint in Perth, it was Australia Post who delivered the letter to the British Government."

Struck from 1oz of 99.9% pure silver in proof quality the commemorative coin is issued as Australian legal tender. The coin’s reverse is testament to The Perth Mint’s outstanding coloured minting skills and features a coloured representation of Isaac Nichols boarding a vessel in Sydney Cove, along with border inscription 200 YEARS OF POSTAL SERVICE IN AUSTRALIA.

The Perth Mint will release just 7,500 coins, each housed in a black presentation case and illustrated shipper.

The Perth Mint’s 200 Years of Postal Service in Australia silver coin retails at $89.50 and is available from The Perth Mint Shop located at 310 Hay Street, East Perth, by FREECALL 1800 098 817, at Australia Post outlets, and leading coin distributors. Alternatively, collectors can purchase the coin via The Perth Mint’s online store at www.perthmint.com.au.

Hi,
I have an Australian Coin celebration 200 years.
1788 – 1932, whith a picture of a boat on one side, and 3 childrens heads on the other side.
Would you know how much it is worth.
Thank you,
Silvia