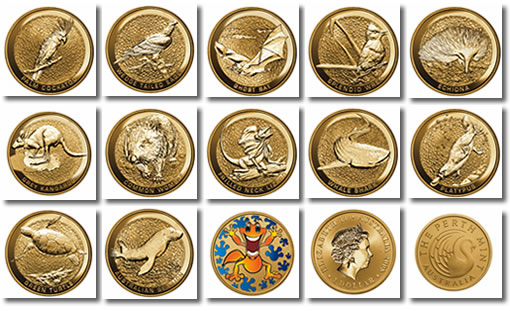 With the number of mature-aged collectors in decline around the world, Perth Mint Sales and Marketing Director Ron Currie said that the industry was in agreement that new initiatives were needed to boost participation in one of the world’s oldest hobbies.

"Young Collectors is set to tackle the challenge with a program of annual releases portraying themes appealing to children," he said.  "It starts in 2008 with the release of 12 Australian Animal $1 coins on brightly illustrated information cards."

Mr Currie said that the program would also appeal to adult collectors wishing to share their passion for coins.

"We’re hopeful that they will see Young Collectors as the ideal way of igniting young people’s interest in the hobby.  Consequently, we’ll be promoting the program as a great gift idea, particularly for people looking for traditional toys with educational value and enduring appeal."

As well as individual coins, the program allows collectors to purchase a Starter Kit including three coins and a Complete Album with all 12.  Housed in a robust ring-binder featuring a three-dimensional image of a kangaroo on the front, these options also contain coloured animal stickers, fun drawing games and word puzzles.

As an incentive to purchase the Complete Album, it includes a bonus medallion portraying the friendly cartoon character ‘Gordy the Gecko’, who writes exclusively to children about himself and the exciting Young Collectors website created by The Perth Mint to support the aims of the new program.

Scheduled to launch in August, youngcollectors.com.au is entertaining and informative and creates a ‘buzz’ around the topic of coins with lots of ideas on how to start and care for a collection.

Recommended retail prices for Young Collectors range from AUD$9.95 for an individual coin to AUD$79.95 for the Complete Album.  The program is available from The Perth Mint Shop located at 310 Hay Street, East Perth, on FREECALL 1800 098 817, via the web at www.perthmint.com.au, and leading retailers and coin distributors.

Best idea is to put one of these coin into cereal boxes for kids. This makes whole new generation of coin collectors or Numismatists. So,we call this Numismatic the Next Generation!