Greenland Northern Lights and scientific research is the theme for the third and final series of Denmark Polar coins to commemorate the International Polar Year (IPY), which is a large scientific program focused on the Arctic and Antarctic. 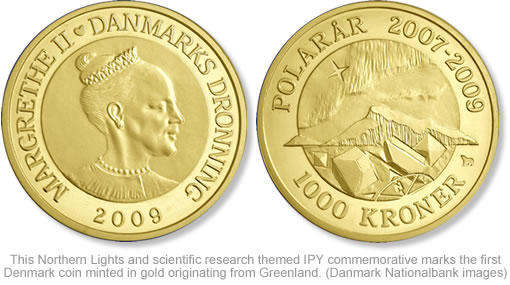 Circulating aluminum bronze 10-krone coins and collector editions in .999 silver and .900 gold with denominations of 100 and 1,000 kroner were launched Monday by Danmarks Nationalbank.

The reverse or tails side of each were sculpted by Professor Morten Straede who described the design Monday in a Royal Danish Mint press release:

"My idea with this coin is to give a very compact impression of some of the scientific research based in Greenland. I have chosen to focus on research around the magnetic North Pole, on ice core research and finally on mineralogy," said Straede.

"The modelling of the three fields of the coin differs. The Northern Lights are open with a light touch, the minerals are shown in their basic crystalline forms and the landscape in the middle is modelled so as to resemble a direct experience of a Polar landscape –the surface of the water, the curve of the sky and the sharp structural diversity of the mountains and the ice. At the bottom of the coin, the compass card points to the North Star at the top of the motif."

The Northern Lights gold version is the first Denmark coin to be struck from Greenland gold. It bears a small polar bear in the right legend symbolic of Greenlandic gold.

1.2 million of the 10-krone circulating coins are to be distributed through banks. The silver and gold editions are available through the Royal Danish Mint for DKK 300 and DKK 2,500.