The Royal Australian Mint has announced the start of the 2008 Polar Series coins, which mark the 4th International Polar Year – a large scientific programme focused on the Arctic and the Antarctic. 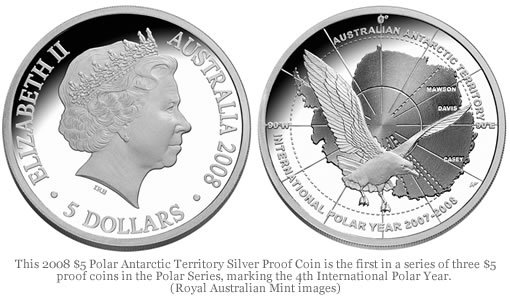 The first in a series of three $5 silver proof coins was revealed in Hobart on Feb. 1, 2008, at the Australian Antarctic Division (AAD), an agency of the Department of the Environment and Water Resources that ensures Australia’s Antarctic interests are advanced. The first coin looks stunning, making for a promising series of coins.

The obverse or tails of the coin portrays the Antarctic Skua in flight. These large heavily built birds are closely related to members of the gull family and have a reputation of being fiercely predatory, earning the nickname "raptor of the south". The Skua on the coin is said to symbolise,

Behind the Skua is an image showing the Australian Antarctic Territory and several points reflecting Australian scientific research stations.

Senator Nick Sherry, the Minister for Superannuation and Corporate Law and responsible for the Royal Australian Mint, introduced the coin and commented:

“The Polar Series of coins marks The 4th International Polar Year 2007-2008. Australia has a proud history of exploration and ongoing involvement in Antarctica, and it is fantastic that the Royal Australian Mint, working with The Royal Society of Victoria, has produced Australia’s coins as part of an international program where a number of countries have issued silver proof coins commemorating the International Polar Year.”

Captain McAuley is the Leader of The RSV’s polar expedition (RSV – INTREPID) which is planned to depart for The Antarctic in December. Professor Stoddart is the leader of another major IPY project – the Census of Antarctic Marine Life.

The Proof Skua coin is available for:

The coins may be ordered online through the Royal Australian Mint page: