Precious metals stepped back Thursday with gold falling for the first time this week following a 7-month high. New York silver, gold and platinum futures declined 2.5 percent, 0.2 percent and 2.0 percent. In other news, U.S. stocks faltered as the DOW slid to a 6-year low and oil surged 14.0 percent as crude inventories surprisingly fell. 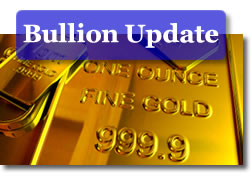 March crude-oil gained $4.86 to close at $39.48 a barrel. The average price for regular unleaded gasoline fell eight-tenths of cent to $1.949 a gallon, according to AAA.

"Gold is the new flavor of the month," said Leonard Kaplan, the president of Prospector Asset Management in Evanston, Illinois. "The reason gold keeps rising is because people are fed up to the gills with the traditional investment system because it has failed them."

"Gold prices spent the day on the defensive for a change, recording lows near $968 per ounce, but the overall tenor of the market remained firm," said Jon Nadler, senior analyst at Kitco Bullion Dealers.

In spot trading, the London afternoon gold-fixing price — a benchmark for gold traded directly between big institutions — stood at $980.50 an ounce. London silver and platinum were at $14.26 and $1,063.00, respectively.