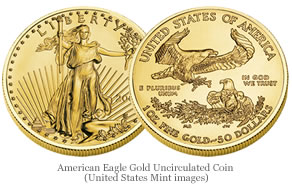 Just two 2008-W American Eagle Gold Uncirculated Coin options remain from the United States Mint. The one ounce size sold out, and was pulled from the Mint storefront Wednesday.

A backorder shipping date had been assigned to the coin since Tuesday. Based on recent trends, that assignment has been an indicator for a fast approaching sellout.

The Mint price guide shows 8,591 of the coins have been sold, plus the 2,997 included in the 4-coin set. New sales figures will be out later in the week.

The remaining 2008-dated gold coins in the American Eagle series include the 1/2 and 1/4 ounce options. The latter has a Mint backorder shipping notice of 3/05, and is likely to disappear soon. Neither of these collector coins will be issued in 2009. The Mint announced late last year that each would be eliminated from its numismatic portfolio.

I have a question, I have a 2008 W one quarter ounce gold uncirculated coin that I purchased from the U.S. Mint. I have been searching for the actual mintage and if this coin is considered the lowest mintage of all 1/4 oz. American gold eagles. Could you help me in my search? any information you can afford me would be greatly appreciated.