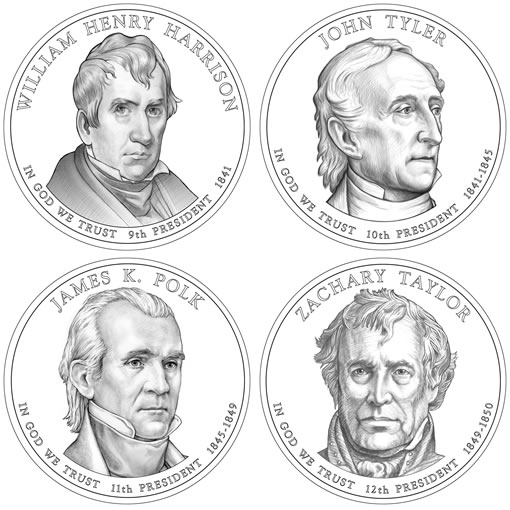 Congress acted and a new law was passed in late 2007 that empowered the Mint to move "In God We Trust" to the obverse, or heads side of each coin. The law was too late to affect already designed 2008 Presidential dollars, making 2009 the banner year for change.

“We hope Americans not only appreciate the aesthetic qualities of the Presidential $1 Coins, but also remember each President’s legacy every time they use the coins in their daily transactions,” said United States Mint Director Ed Moy.

“Presidential $1 Coins are convenient to use, save the taxpayers money, and are durable and last for decades.”

The following information was provided by the Mint for each design:

The reverse design on all Presidential dollars features a rendition of the Statue of Liberty, designed and sculpted by United States Mint Sculptor-Engraver Don Everhart.

I think Proofs should stay the same.

I am so pleased that In God We Trust will be on the face of the coin instead of edged on the side where it would have easily disappeared over time…Thanks to the many who boycotted this and showed their faith in God the Almighty One. This nation was founded on Christian principals and we must never forget that God is in control….God Bless America!

Will the 2009 dollar coins be minted in P&D versions or will there be just one version.

I recently saw the picture of a new U.S. coin that on the backside
said “New World Order” and did not have ‘IN GOD WE TRUST’ on it.

Was this a joke or is there such a coin being minted???

Does it matter which side the inscription faces on new $1 coins? ex: when reading side inscript. should Pres. head face up, or down? Is the date location in the same place on each coin?

Joan Welsh – PLEASE take the time to do some research before believing every internet rumor that comes over your screen. YES IT’S A HOAX! Just another crazy stunt designed to get people worked into a frenzy over symbolism instead of relying on facts. New Inscription – The coins are put through the lettering machine randomly. About half will face towards the obverse and half towards the reverse. There’s no “right” or “wrong”, just chance. Richard Kupkee – The coins will carry mint marks on the edges, just like the Presidential dollars. All coins except cents have had mint marks… Read more »

There seems to be a couple of mistakes I found. The 1st mistake was between the edges of the 2009 United States one dollar coin. I have a number of those coins and there is the words (E Pluribus Unum)going in reverse on one of my coins. The second mistake I found was when I tried lining up the heads of Zachary Taylor with the others, one head of my coins is counter clock from all the rest. Let me know what you think about these coins I have. Thanks!